She’d been alone for so many years, hiding in a sheath of trees north of town, eating what she could pick or kill. Sometimes she thought it was her punishment. Sometimes she thought it was theirs. Her family all hated her since she had gotten pregnant at fifteen, and they'd said God would judge her for that night with the boy she loved. She’d run away into the trees to hide the baby so they wouldn’t take it away from her.

The baby was stillborn, its face, once she cleaned it, soft and gray and quiet. But she wouldn’t go back, not to her family, and she'd learned during her months in the trees that she didn’t need them anyway. The boy never came after her, though she told him where she would be. She didn’t need anyone. The trees were enough, the animals, and when she was really hungry she could lie on her back and let her faintness take her into the clouds.

Sometimes, she broke into houses near the tree line to stand over children while they slept. They were so vulnerable and soft, so innocent. She had been like this once. And yet she could see marks on their bodies where they had been cruel to each other. She knew from her family that God punished love, so she tried not to love the children she watched. She would not let them love her either, never staying long enough for them to open their eyes.  Once, when she startled one of them playing in the woods, he threw a rock at her, afraid, and she let him. She wanted to be innocent with them, which meant thrown rocks, bruises, and staying away.

Still, she liked what she had become. She slept in a den of sticks of her own making. Language and its judgment escaped her. Was being animal closer to God than innocence? Her voice was her breath. She was still alive.

One night, she emerged from the woods and the houses were empty. No lights burned and the children and parents were gone from their beds, their houses open to her like split fruit, the hasty packing apparent in the drawers they left still open. She ate from their pantries until her belly was so full she ached. She knew they had all been taken up in rapture, holding hands together, but she had been outside and she had not been taken. She was alone now; the whole world of people gone. There was no one to remind her what she had been before becoming animal. She was alive. She slept in their beds and slept harder than she had the last time she lived in her parent’s house.

In the morning, the storm came. She remembered the words: hurricane evacuation. The windows in the house strained with a gust of wind that beat against the door with whips and lashes. She tried to step outside, but she couldn’t stand up with the wind pushing her over and the rain stabbing her face. Grayness roared through the skies. The sliding glass doors of the house bowed and then finally burst, shards of glass glittering at her feet and spraying as the storm rushed inside.

When the roof peeled from the house and she was swept into the street, the tornados lancing into the town like avenging angels, she thought, doesn’t this feel like forgiveness? The man-made world was clearing for her. She yelled without words. She was pressed into the flood, swept towards the center of town, and the water carried her.

Julio’s forgotten to buy the Halloween candy. Outside, ghosts and unicorns roam the streets. Every few minutes the doorbell rings and shrieks of expectation rise behind the door. We turn off the lights and hide in the closet in shame.

“I can’t believe this is who we are now,” I say, pushing away one of his jackets hanging over my face .

I snort. His daughter is a brat who comes over offering me makeup pointers that her mom, the Avon lady, gave her. His ex-wife is a glowing amazon, and when she drops their daughter off, she does not wipe off her smear of condescension. “You have to look a certain way,” her daughter often repeats in her eight-year-old voice. I cross my arms over my pregnant belly.

I hear my name outside. I freeze with terror. Then I realize a girl in the neighborhood has the same name as me. She is being bad, and I can hear her parents calling my name but not me, over and over.

Someone pounds the door with more ferocity than any trick-or-treater yet.

His arm is on my belly, sticky with our sweat. I pry him off.

When the knocking stops, a little face hovers in the window that overlooks the side yard. “Daddy,” his daughter says, “it’s me.”

He’s even forgotten that it’s his weekend.

Julio reaches the door while I awkwardly get up. His ex-wife’s car is already halfway down the street, speeding and dodging trick-or-treaters. The kids swarm our house for candy before we can shoo Daniela inside. She hands me face powder too pale for me, a gift from her mother. She’s dressed as a witch.

We put on Snow White in her room. She can repeat all the lines by heart. I go back to the closet, where Julio joins me. The windows rattle with knocks. The children can see the flicker of the TV.

“I’ve got one,” he says. He tells me a story about perfect mothers who built candy castles for their children so they would never go hungry, until the dragon came.

The heat of the closet makes me drowsy, and I close my eyes. When I start awake, Daniela has her ear to my belly.

“You’re Snow White,” she says. “Daddy’s the prince, and I’m the witch trying to keep you apart.”

They help me to the couch, lay me down, close my eyes.

“Now kiss her awake.” Daniela cackles and hits me in the legs with her toy wand.

A shadow grows behind my eyelids. Julio’s lips moisten on mine.

The door is shaking with children’s fists. I know what they all need me to become—a candy castle of myself. Inside, the baby thrashes. Will I stay sleeping? 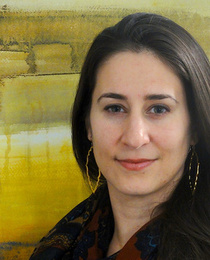 Brenda Peynado's short story collection, The Rock Eaters, is forthcoming from Penguin Press in early 2021. Her stories have won an O. Henry Prize, a Pushcart Prize, the Chicago Tribune's Nelson Algren Award, inclusion in The Best American Science Fiction and Fantasy, a Dana Award, a Fulbright Grant to the Dominican Republic, and other awards. Her work appears in The Georgia Review, The Sun, The Southern Review, The Kenyon Review Online, The Threepenny Review, Tor.com, and other journals. She received her MFA at Florida State University and her PhD at the University of Cincinnati. She's currently writing a novel about the 1965 civil war in the Dominican Republic and a girl who can tell all possible futures, and she teaches in the MFA program at the University of Central Florida.