COMPARTMENTALIZATION, OR, SOME THOUGHTS ON BOXES

Two sides of what used to be one wooden box hang on the walls of the Smart Gallery in Chicago. At first glance they are unremarkable: vaguely Italian-looking landscapes populated by two vaguely Italian-looking lovers, all flowing hair and slit silk. In the panel on the left, a woman lies improbably across some rocky ground—perhaps sleeping or dead—while a man leans on his staff and peers over her with a neutral expression. In the panel on the right, in front of a section of silvery sea, the same woman stands apart from the man who reaches toward her. His mouth is open. Her hands cross upwards into two woody stems and blossom into the unmistakable broccoli-floret silhouette of a tree: Daphne, turning into a laurel to escape the god Apollo.

These paintings were once opposing panels of a Florentine cassone, an ornate 15th century trunk commissioned to carry the dowry of a bride to her new home, where the trunks would remain a luxury furnishing in the bedchamber. Though the stories on these boxes often contained a lesson for the newlyweds, the moral imparted by this myth is ambiguous. As Ovid tells it, Apollo insults the god Eros, who takes his revenge by making Apollo fall in love with Daphne, whom he has enchanted to detest the company of men. She runs until, exhausted, she pleads to be changed so that Apollo no longer desires her. Her father, the river god Peneus, complies by turning her into the first laurel tree, whose branches Apollo will wreathe into his crown.

The Master of these particular paintings includes none of the spectacle of the interpretation of the myth by Piero or Antonio del Pollaiolo, where Daphne is lifted into the air by branches that burst from her shoulders like wings and bristle darkly over two-thirds of the canvas. There is none of the later Baroque melodrama of Bernini's statue where Daphne turns towards Apollo in terror as her torso hardens, her hair tangles into vines, and her toenails lengthen into roots. The Daphne of the cassone looks so certain, stands so still. She raises her hands, elbows at right angles, as if to pull a curtain down.

This Daphne is not transforming: she is disappearing. We catch her in the process of becoming a bit of background. Her dress billows up the same pale blue as the sails of the ship and the waves on the sea. The frame crops her lengthening hands as one might crop an unimportant edge of landscape. This is not an ars poetica where Apollo folds a woman into
the leaves of a poem. This is familiar, the escape offered by transformation is something Daphne already knows how to do. She raises her hands and becomes an object, material for reproducing other objects, a decoration, a forest, a story. Her virginity remains a closed and infinitely valuable commodity. This brings us to the box itself.

A box is a human intervention into space. Boxes are deliberate: all stress and pull, flat planes of wood, metal, or cardboard pinned and held open. Break a box open and the air shivers, there is an absence where there was an interior. These panels, transferred onto canvas, seem joined by the ache of keeping a room open. I imagine the box—when it was whole—filled for a bride. Her mother and the other women in the household packing it with fabric, clothing, currency, all they can give her for the transition from daughter to wife to mother.

Perhaps the legend on this box was neither an admonishment to chastity or obedience, but a quieter gift. It is possible, this object seems to promise, to survive whatever may happen, even the translation from an individual to a branch of the family tree. Daphne, armored in bark, can withstand anything. She puts on, like a mantle, the position she would be forced to inhabit. Her body becomes raw material from which boards can be shaped for cassone, from which homes can be made, which can be burned for fuel, or ground into "wood pulp, which you can make into paper," offers a friend. If Apollo broke a spray for his crown it was both a mundane act of vegetable violence—simple as tearing a blade of grass—and the mutilation
of a body. Daphne remains neither long enough for the act to be truly comfortable or truly disturbing.

It is, I think, significant that one of the most common coping mechanisms for dealing with trauma is called "compartmentalization." It takes practice to tell a beautiful story, to shape oneself in a situation so as to make something seem natural, normal, so as not to mar how it looks. While an event is occurring it can feel like there is no precise beginning, middle, or end. It is hard to find edges to fold, to put away neatly. But once you know how to do it, how to dissociate from what is happening, a sort of rapture becomes possible.

In Brueghel's "Landscape with the Fall of Icarus," we see the death from above, Icarus partially immersed in the sea, eclipsed by the detail around him. Icarus dies in a landscape where people live and love and push ploughs. From this distance the splashing might not even be Icarus, but another boy who has jumped from the cliffs into the glittering ocean. In her blank gaze, I see Daphne seeing herself from above, as part of a scene. I see Daphne carried away from what is happening even as Apollo reaches towards her. Emily Dickinson wrote:

There is a pain—so utter—
It swallows substance up—
Then covers the Abyss with Trance—
So Memory can step
Around—across—upon it—
As one within a Swoon—
Goes safely—where an open eye—
Would drop Him—Bone by Bone.

Or, "watch me repress," as my friend Molly said with a laugh while turning over some asparagus in a cast iron skillet. It took me years to learn to talk about it. I still cannot remember precisely. I remember the settings. One of those early-aught bedrooms: earnestly nostalgic posters on the wall for bands I can't listen to now, a record player, a mattress on beige carpeting, two rectangular skylights. I remember the river and the curly willow tree. I remember what I learned to call beautiful so it could fit into the picture of my life: what I called desire, what I called love.

I re-wrote my body into impossible things: a building on fire, a buzzing ache in a shoulder, a dog scraping its muzzle until it was raw. I remember his eyes wide, slipping the first edge of a button through the lip of a shirt. I remember him laughing, "did you want me to light a candle or something?" I remember the veins threading the small pink chapels of his dog's pointed ears. I remember the wind at night whistling between the stop sign and its perforated pole. I remember thinking if one stood rigidly enough, the angle of your position or protest could press any movement around you into a sort of music. I remember deciding not to remember much else.

My obsessive aestheticization of and estrangement from my experience made many things endurable. It also allowed me to walk back and forth to his place for years. In the way of such things, its ending was not dramatic but breakup vernacular. I packed up everything that reminded me of him tightly in boxes and hid the boxes in the attic. They're still there.

Years later, my mother was driving me across the river to the city proper. She woke up well before me, packed my bags and boxes of books into the trunk, and now waited, thumbing through the orangey-pink Financial Times. I was settling into the seat when she asked if I wanted to drop by the coffee shop where he worked. I stuttered: no. No, I didn't, and would it be alright if we didn't go back there, ever, if we didn't buy anything from there because please, I didn't think I could drink it, have it in my body anymore. She folded the newspaper. The rain scattered heavily across the windshield and we watched it for a moment. She said, quietly: "I thought something like that might have happened." And then. "I love you."

As I write out these details, more beauty slips over the memory and softens it. She put the key in the ignition. The soft sides of the cardboard boxes she packed shifted against one another. I wondered how many times something like that had happened. To her, to others. And how they moved on from it, with it. How many decided to make it into something simpler, something easier to carry. 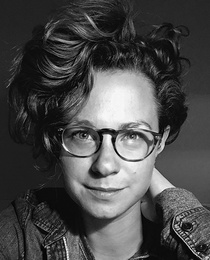 Katie Bellamy Mitchell grew up in Old Town, Alexandria, VA. She is currently a PhD student in the Committee on Social Thought at the University of Chicago, where she researches the poetics of apology. She was a recipient of a fellowship from the Bucknell Seminar for Younger Poets, and her poetry and essays have appeared in SixByEight Press and Prodigal.