We lived on a great deal of land. The front lawn rose in a series of hills. Big ones. Rollicking. Undulating. A real sight come winter when snow covered everything up and the white lawn merged with the white sky and the whole world vanished. But it wasn’t winter. It was summer. June. And the eight of us kids and Mom were honoring Dad for being a Dad. He wasn’t a particularly good Dad (though we weren’t great kids, either, loud and ravenous, always asking for pizza or pocket change), but the holiday didn’t call for distinctions of merit. It was a celebration of basic qualifications. Dad was a Dad. He passed. So we celebrated him.

Mom made him an omelet the size my head plus a hearty serving of bacon. He never ate bacon—doctor’s orders. Whenever he tried to sneak a piece from our plates we made sure to tell Mom. But this morning he ate three whole pieces, the extra fatty kind, greasy enough to make white paper turn clear. He licked the meaty crumbs off his lips. A quarter-smile showed on his face. Our father was happy. And we wanted to make him happier. So we gave him his present: an extra-long putter we’d stolen from the mini-golf course in town. Last year we’d given him a sack full of mini-golf balls, three balls of each color. Mom was saving up so we could buy him a driver next year. A pitching wedge the year after that. Someday Dad would have a whole set, about the time the last of us graduated high school. Golf would help him get over the empty nest. Maybe we weren’t such bad kids after all.

Dad examined the club like it might become something else if he stared hard enough. “Henry,” he said, “Why don’t you get me my golf balls?” I’d come prepared. I picked up the sack and handed it over. Dad looked at Mom. “Sherrie, how ‘bout another strip of bacon, for when I come back? I’m gonna go hit the links.”

We followed him outside, gamboling and skipping. Dad paused at the hill closest the house. He dug around in the sack. “Does anyone have a tee?” he asked. We turned stiff-faced. Next year, we thought. But Dad made do. He set a purple ball on the ground and then told us to get behind him. “We are,” we said. He said, “No, you’re not.” He started his swing so we split, opening up a clear path to the house. The first ball shattered the downstairs picture window. “Boom!” Dad shouted, as the glass shards fell with a delicate clink. He raised his hand for a high-five. We all reached out for him, but he chose to slap my hand. I felt honored. Until his second shot took out my bedroom window. No one even considered high-fiving him after that.

Half hour later the house looked abandoned. The siding was inconsistently dented. Windows looked like dried eye sockets. The front door’d taken a beating. “Caddy,” Dad said, and tossed his putter over his shoulder. Nobody tried to catch it. Inside, a single piece of bacon, cold and gelatinous, waited wrinkled on his plate. Mom stood by the sink sipping coffee. She was squeezing her mug like it might run away. Dad took a bite of the bacon. “Mmm mmm,” he said. “Delicious.” That was the last time we saw him happy. 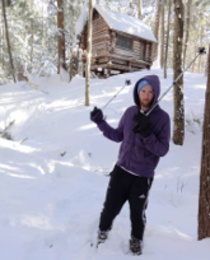 Alex McElroy’s fiction appears or is forthcoming in Indiana Review, Diagram, Tin House, Passages North, Washington Square, Memorious, and more work can be found here. He currently lives in Arizona, where he serves as the International Editor for Hayden’s Ferry Review.