Grandma always said Grandpa was a merman. She said that because his mother had given birth to him in a tub filled with day-old water and bless-ed salt, Atar‘atheh must have been responsible for his conception in the first place.

My great-grandparents fled Damascus in 1925 during the revolt lead by Sultan al-Atrash against the French. They ended up in Ankara with their son and four wooden chests, filled with clothes, Egyptian cotton sheets (starched and pressed with their dantelle sides up,) and some gold. It was all they had left.

My Grandpa moved from Ankara to Istanbul when he was twenty, two years after his last parent passed away. When I asked him why, he told me, “You see, I needed to see the sea,” and chuckled. He learned to swim at twenty-one and at twenty-two discovered the existence of islands.

He spent as much time as he could around The Prince Islands. He worked as a ferry usher, a skipper and a fisherman. This is where he met my grandmother. She came from a wealthy family in Istanbul who summered on The Big Island.

My Grandpa told me that when he first met my grandmother she smelled like The Sea of Marmara, like the mussels that grew on the bottoms of old boats, like sweet clams and seaweed. My Grandma didn’t like this description. “That doesn’t sound like a compliment,” she said. So she told me things about my grandfather: that when he didn’t brush his teeth, they turned green with algae instead of yellow with plaque, and that if she’d let him,  “He would grow scales the way most men grew beards.”

It wasn’t surprising that my grandfather loved seafood. “I’ll eat anything that comes from the sea,” he said, “I’ll eat my father if he came from the sea.” Mom told me that once, Grandma got so fed up with these exclamations that she pulled a shoe out of the sea, handed it to him on a plate and said, “Well, eat!” People have given me different accounts on whether or not he did.

I was seven the first time Grandpa took me fishing. He let me carry the rusty bait bucket half-filled with salted chicken breasts. He said, “We’re off to catch tigers by their toes,” and indeed we had. We caught these medium sized fish, ugly, with faces too long and lips too big. They had silver scales that looked rich, and dark brown stripes going down the sides of their torsos. “These are the tigers of the Bosphorus,” Grandpa said, “striped bass.” He held them by the tails as they flailed and said, “Look, I’m holding’em by the toes.”

As much as my Grandpa was of water, my father was of land. He hated seafood and even called lobsters “sea-bugs” and crabs “water-tarantulas.” Grandpa had wanted my father to be a marine engineer, to build the big boats that ruled oceans as much as seas. But my father was an immigration lawyer who had recently ended up working with Syrian refugees. He talked to them in an Arabic that came from a place deep in his throat and vibrated his syllables. He told me, “Even though these people don’t have homes, they feel like home to me,” and decided that he would try to help every single refugee family.

He was killed not long after, in an attack led by an extremist nationalist group. The group claimed that they were fed up with these Syrian Refugees. They said it didn’t look good to have people like them, sleeping in our subway cars and living on our sidewalks and streets. They claimed the Syrians stole, surely stole, because the crime rate was up. They said the Syrians were terrorists connected to ISIS. They said that bombing them was the only way to prevent being bombed.

Grandpa took me fishing a week later. We hooked live grey mullets into our rods and waited for a nibble. We looked out into the blue, under the green hills studded in houses and the translucent mist that hung around, unsure. We watched the wooden fishing boats, the coast guards and the yachts move with confidence over crooked waves.

It was a good day for fishing. Grandpa caught many sea bass and threw them into the catch-bucket. I looked in. Their luminous eyes popped out as they tried to open their mouths as wide as possible for one breath. Fish were drowning. They were trying to suck the very moisture from the air, to breathe. I threw them all back into the sea. I told my Grandpa, “I can’t.”

He nodded and walked over to a fisherman. He handed him some money and hired a wooden boat for the day. He drove us out to where the Marmara met the Black Sea, the least polluted part of the Bosphorus where we usually looked for dolphins.

Grandpa turned to me with tears in his eyes. He gently brought my finger to his cheek and made me wipe his tear off. He told me to taste it and said, “We all have a little part of the sea in us, Ali.”

Grandpa’s tears rolled down his face and drop-drop-drop-dropped onto his chest, legs and feet. I saw his pores thirstily sponge it all up and break out into round-edged scales that covered him in a greenish tint from head to tail. 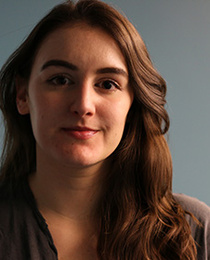 Zeynep Ozakat was born and raised in Istanbul, Turkey, and educated at NYU's Gallatin School of Individualized Study. Her work appears in Glimmer Train Stories, where she won the December 2014 Fiction Open Contest.