You Are Here: An Interview with Eduardo Portillo 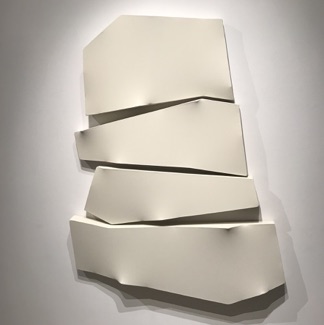 If Eduardo Portillo’s hybridization of painting and sculpture were translated into a question, it would be: how much freedom is possible within predetermined limits? To punctuate a blank canvas, Portillo bothers with only two variables: surface tension and color. The core of his practice entails stretching sheets of canvas across frames he has fashioned into irregular shapes. Raw, flat surfaces for painting become a tactile topography of warps, ridges, and tessellated bulges (Fig. 1). When first viewing Portillo’s work, it takes a beat or two to realize his material is not some new synthetic devised by a shadowy defense contractor, but, simply, painter’s canvas.

“When I built my first stretcher, it was like finding a big surprise” says Portillo. “It let me reinforce what I had been doing with painting, which was playing around with points of tension, ideas about the canvas as a fabric, as something I could manipulate and explore different possibilities with, not just within the gallery but also with the rectangle. Painting didn’t have to be just rectangular—I really wanted to challenge that.”

The results of Portillo’s process recall overgrown quartz, shards of crystallized atmosphere, Planet Krypton circa 1978, fragments from worlds too microscopic or formidable for humans to explore without technological mediation. The shaped canvases he coats in white acrylic evoke aerial views of sand dunes, as with the multi-sectional Karakum C100 (Fig. 1), named for a Central Asian desert. More commonly, to each piece he applies a single saturated hue, sometimes with one or two supplementary colors to achieve a gradient, in a way that looks airbrushed (Fig. 2). The overall effect is surprising: high visual drama through precious few means. 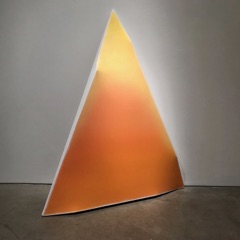 Portillo reveals his work refers to places visited in his imagination—remote wilds, distant stars, other galaxies—and those he has been to in person, while meandering on road trips through the Southwest for example: “Places that caught my eye were in New Mexico and around Marfa. I had to stop and spend an hour at times and notice the direction of the sun, and how the shadows were falling, the ways they appeared sharper and richer.” Other sources include memories of his native El Salvador: the calderas, crater lakes, “mountains, trees, and the volcanoes, all very iconic with a dynamic presence, horrific but beautiful” (Fig. 3). When asked if he ever thinks of his work as a variation of landscape painting—the genre preferred by Romanticism for picturing the sublime—Portillo explains he is less interested in specific geographies than in the contemplation of traveling vast distances or venturing near nature’s power: “It is more about the feeling, the endlessness.” In accordance with the alienness of his art, he articulates a wanderer’s spirit: “There is this openness to imagination, even the act of naming places, looking at craters on Mars and naming that crater; this speaks something about us, how much we are explorers, adventurers, travelers, roles we have played since forever. I’m very moved by that” (Fig. 4). 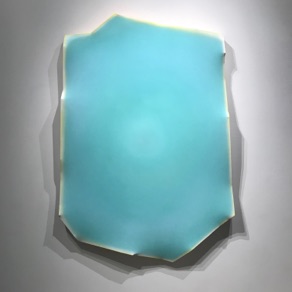 But how does a painter capture the feeling of endlessness? The canvas—flat, static, delineated—seems hardly adequate for communicating expansive inspiration. Furthermore, for Portillo, painting had come with mental baggage from the beginning: “Since I was a kid, people taught me you had to be really careful with painting: you had to think about where you put the brush and consider your direction carefully. My idea of painting was it was the most romanticized of any art.” Eva Hesse, who also switched to sculpture from drawing and painting, once expressed likeminded sentiments in her diary: “For me painting has become that [anti-climactic]. ‘Making Art’—‘painting a painting.’ The Art, the history, the tradition, is too much there. I want to be surprised. To find something new.”

In order to develop his composition in a way that felt less committal, less charged, Portillo turned to the camera. “Photography is flat but still represents an interaction with a space, and this practice helped me experiment with placing shapes on a surface and not be afraid of it,” he explains. “After building these exercises and then combining them with drawing, photography is no longer specifically the basis but it informs my work.” Portillo’s comfort with another format also helped him eventually overcome his painter’s block. “When I first took sculpture, I found an ease with it; I didn’t think twice about making something,” he remembers. “It was different from painting. With sculpture, it was my own experience without someone telling me how to do it. It opened up many opportunities. It allowed me to be more contained and still expanded.” Portillo carried his ease with sculpting over to painting through the process of stretching and shaping canvas: “I started exploring shapes, finding out how much the canvas could do.…It became its own language.”

The shaped canvas is not a new innovation; it emerged in the early 1960s when painters such as Frank Stella, Lynda Benglis, and Charles Hinman began flirting with the third dimension. Portillo was vaguely aware of this spinoff of abstract art when different factors conspired to lead him to his current process. At the time, Portillo was living and making work in Texas where he had earned a BFA at the University of Houston, which he completed in 2011. While working at Anya Tish Gallery, who now represents him, Portillo encountered the work of the octogenarian, Houston-based painter and sculptor HJ Bott. These firsthand interactions with Bott’s structural experimentation tapped into the young artist’s “early days in school working in sculpture and thinking about site installation,” and his “attraction to a shape within a painting and what in theory it could do, making it come out into the space and create this other environment.” 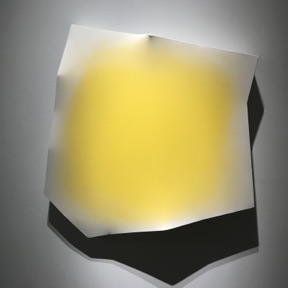 Freedom can be a gift, particularly for an artist who has felt obliged to paint a certain way. Portillo reports: “Growing up in the very small town of El Congo, I was one of eight painters, painting objects in a folk tradition. Now, contemporary art has emerged in El Salvador. There is a true openness to making things conceptual and commenting about what’s happening in society…. More people are following their own path, figuring out what art means to them.” The weight of tradition can stymie artists, but so can the infinite routes spread out before those beginning to decide their paths. Limiting his choices to canvas shape and a single dominant color has given Portillo freedom he can manage. Along with the possibilities birthed by restrictions, other oppositions run through his portfolio: endlessness conveyed by finite objects, maximal encounters expressed through minimalism, painting informed by a sculptor’s concern for spatial interplay, openness made viable in the white cube. Most of all, Portillo evokes the fundamental tension of being “there” in your head while “you are here” physically. The formal restlessness of his shaped canvases embodies what a traditional landscape can only envision: being body bound but bedeviled with an urge to roam. 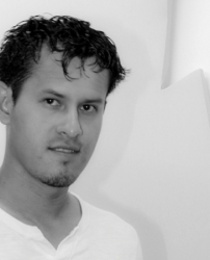 Born in El Congo, El Salvador, Eduardo Portillomoved to Texas in 2003 and graduated from the University of Houston with a BFA in painting in 2011. Portillo has completed artist residencies at the Universidad de Ciencias y Artes de Chiapas and the Vermont Studio Center. His work has been exhibited at such venues as Blue Contemporary, San Antonio; Lawndale Art Center, Houston; Site 131, Dallas; Galveston Arts Center; RULE Gallery, Denver; Galerie Richard, New York. In 2013, his exhibition with the HCC Central Art Gallery was included in the Texas Biennial. He has forthcoming exhibitions in Marfa, Texas, and Torino, Italy.