The thing about the guy was that he was so calm when he came in. He took his time looking over the shelves. I figured maybe he was a little league coach. That's who I get the most. That's the good thing about being close to the park. They play over there and then when they need trophies, they come to my shop.

He picked up a little one, a two-handled cup, and brought it to the counter.

"All right. I want it to say, You win, Everything is my fault."

That's when something hard in his face broke, just as he said it. I could see he didn't mean it. But he tried to steady himself. "See how she likes that."

So that's how it is, I thought. I looked out the window. It was a pretty day, with the sun lingering out over the ocean.

"How long will it take?"

"You can pick it up tomorrow morning."

He went outside and took out a cigarette. I wanted to go outside and tell him something, like how I could see he didn't mean it. But I don't talk to the customers as much as when I first started out. He sat on the curb and smoked. Hell, I thought, you don't know the guy's wife. Maybe she deserves the trophy.

I went to work. I centered YOU WIN and put EVERYTHING IS MY FAULT below it. Nice block letters. I looked up and saw the guy stand up and walk around and smoke another cigarette. I didn't want to do it, but somehow I felt like whatever happened, I had to finish the job. I worked slowly, thinking it would give him more time to reconsider. Maybe it's just a joke, I thought. But everything in his movements and his words suggested that it was not a joke, that it was his last stab, as though the trophy could just sit on their mantel somewhere and he'd be able to simply point to it the next time a fight started up and not even have to say anything.

I'd never felt so sad engraving a trophy before, like I wanted to throw it away when I was done with it.

The guy waited very patiently outside and I couldn't tell if he was reconsidering or not. I thought I could go outside and tell him it needed a little more work in the morning and he should come back then. Maybe a night's sleep was all he needed and he'd forget about it. But it was easy work and I finished quickly enough. I looked out at the sun over the ocean some more and then I went outside and told him it was done.

"I've been standing here for an hour —"

"I'm sorry about that. I'm sorry that I didn't say it sooner. I didn't know it till I got done."

"What the hell is this?"

For just a moment, he looked to me like a little boy.

"It can't be the thing you have to give her."

"Then how do you know it's not the thing she needs?"

"Well, I think you haven't given up."

"Look," I said. "You could've written her a note. But you came in here and you thought you'd buy a trophy. The thing about trophies is that they are for display. Sure, the metal is cheap and some of the gold wears off after a while. But people buy them because they like to have them out, for everybody to see. If you're buying a trophy, you got something you want people to see. People don't buy trophies to hide them away."

"Sure, I want it on display. I want everybody to see what she drove me to."

"Well, you're going to have to tell her yourself."

"You're not going to let me have it?"

"What the hell are you going to do it?"

"Talk with her and tell her what?"

"Tell her the truth. Tell her that you went to a trophy shop and the guy wouldn't sell you the trophy you wanted and told you to talk with her instead — and then talk."

"Tell her how you felt while you were waiting for a trophy like that."

"All right. Ask her if she feels dead."

"That's good. It means you haven't killed her."

"That's good. It means you can try to become alive together."

"Are you really going to keep the trophy?"

"People are going to think it's a joke."

"Maybe it's not dead if I keep it. The people who see it will only think it's funny."

"You're leaving it here, aren't you? That's the best you can do."

"It's something I guess."

He turned to go.

I wasn't sure exactly what that way was, and I didn't think the guy knew either, but I thought I would know it when I heard it. 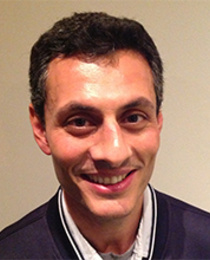 Siamak Vossoughi was born in Tehran, grew up in Seattle, and lives in San Francisco. He has had some stories published in Glimmer Train, Missouri Review, Kenyon Review Online, and Chattahoochee Review. His collection, Better Than War, received a 2014 Flannery O’Connor Award for Short Fiction.