Janine Joseph's poems are forthcoming from or have appeared in Kenyon Review Online, Asian American Literary Review, Best New Poets 2011, Hayden's Ferry Review, Third Coast, and elsewhere. She also wrote a commissioned libretto, entitled From My Mother's Mother, for the Houston Grand Opera's Song of Houston: East + West series. Janine is a PhD candidate at the University of Houston.

You're Going to Be a Terrific Writer

I've sent out thousands of rejections. When I was in high school, I was an editor of the school's literary journal, Imagery, for two years, rejecting teenage poetry like I was Goth and hated everyone. At the community college, I edited Muse and Mosaic at the University of California, Riverside. I like thinking that I took a brief hiatus from crushing writerly dreams during my time at Washington Square, hiding behind the computer as the layout and design editor, but I went to the poetry slushes and wrote big fat No's on envelopes. Sometimes, I wrote big fat No No No's. I read slush as an Assistant Poetry Editor, and as a Poetry Editor here at Gulf Coast, I can say that I've done more than my fair share of ruining your day. Sending your poems out into the world, having them rejected, sending them back out to more journals, rejecting other people's poems--sometimes I worry that the entire process is turning me into an automaton. I'm not the only one to feel this way, surely. But, true story: Some time ago I received an acceptance from another journal and immediately updated my records to indicate that I'd received a rejection. Let's just say it's a good thing that I like keeping good records and double-checked the email for the names of the poems in the submission. "Rejection," I had written, in bold caps. Be assured--I've loved every single minute of every editorial position I've held (disclaimer: I often find joy in most things, but still) and rejection, I know, is part of the job--of being an editor and of being a writer. The job isn't bad, but (and maybe it's in poor form to admit this) I've sometimes become so fatigued from reading submissions that don't eventually make the cut that I can't help but do a bad thing and laugh when a stunner like this comes my way: I want what flows with thought: The magma of A sweet corruption. Sometimes I think I can't take it anymore and then something like this from the cover letter pulls the rug from under me: My poetry breaks new ground. It is raw, powerful, and real. The lines above are so bad that they no doubt made other editors laugh, many years ago, when I wrote them in my poetry submissions and query letters. See, when I was fifteen or sixteen years old, I purchased my first copy of Poets & Writers. I also purchased my first copy of Poet's Market because I was very serious about writing poetry. By the time I graduated high school, I had over four hundred poems organized by theme in a black binder held together by Tori Amos stickers and, yes, nestled in it was my first manuscript ready to be sent out. Over about a month's time, I highlighted my way, alphabetically, up and down hundreds of pages of names and addresses. Over about a month's time, I learned about SASEs and sent two versions of form query letters. To editors. To presses. To literary agents. One night, when I was up with insomnia, I noticed that a literary agent I contacted came online and, yes, I IM'ed her. If you're not cringing yet, I should let you know that I let all of those people know the following about the manuscript I wanted them to pick up: My book is approximately 75 pages, on 8.5" x 11" white paper and bound. I'm going to go ahead and say that I probably also made a lot of Kinko's employees laugh. "While I thought there were moments of admirable intensity in the sample poems you submitted from your manuscript, the work didn't seem 'digested, in a sense,' technically or aesthetically," wrote back one editor. Yes, digested, in a sense was the name of my manuscript. You had to say it out loud to get it, get it? I had well over fifty rejection letters stuffed into my family's mailbox in no time. When I tell my friends now that rejection letters don't really faze me, this is the reason why. (And don't get me wrong, the rejections are still very much coming along--I got one just a few weeks ago, on my birthday, if you're curious.) When I received the following from The New Yorker (of. course. I. did. I. was. a. teenager.): 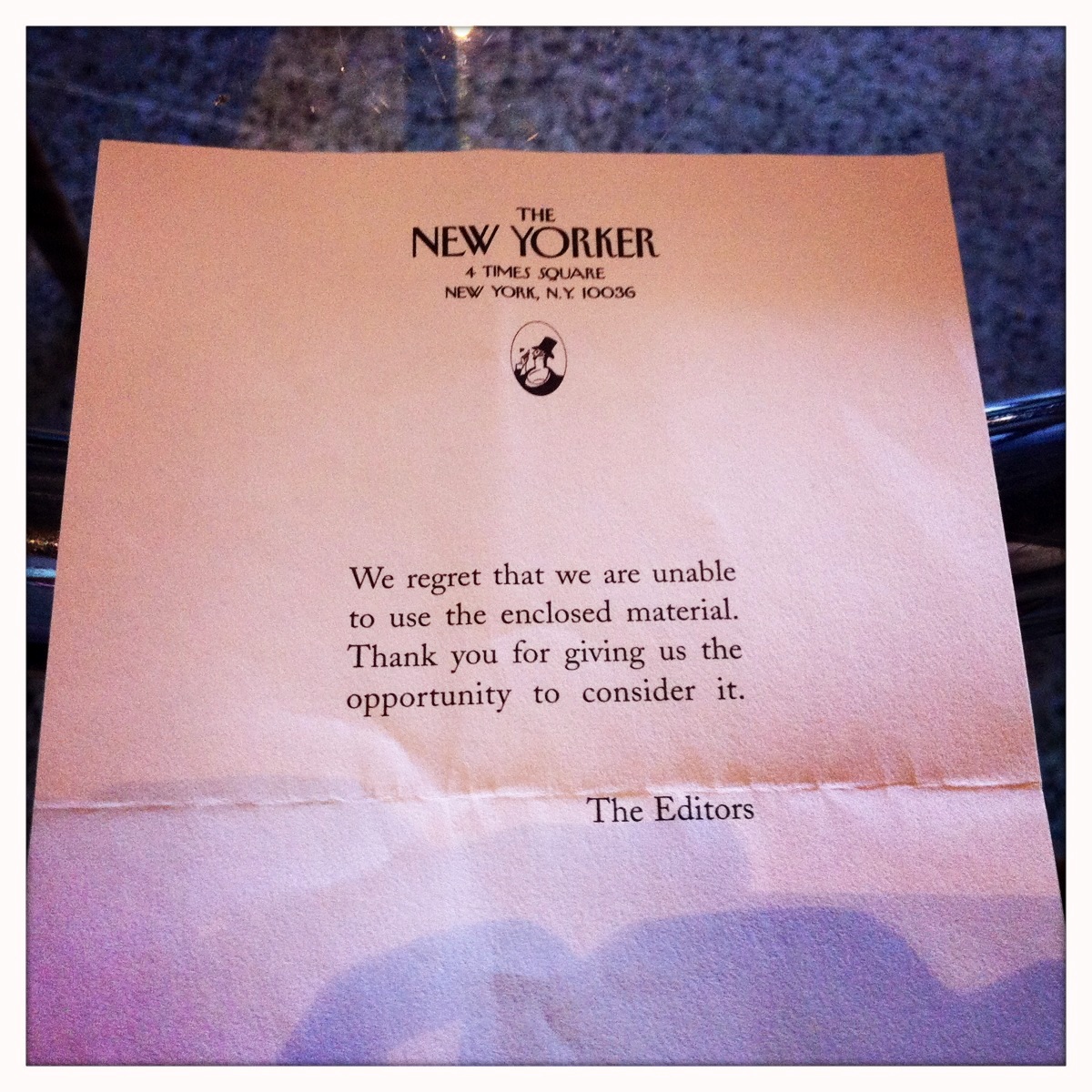 I was like, No biggie. Same thing when the rejection from The Atlantic Monthly came. I had, believe it or not, become so accustomed to receiving rejections that when another came in the mail, I filed it away and got back to work (sometimes back to my homework, but eventually I'd be at it again with the query letters). The same editor who jabbed me for my manuscript's title (though let's be honest: I was asking for it) had also advised, "I must confess that pleasant as it must be to be published in school literary magazines, it would help greatly in purveying your work if at least some of it had appeared in national venues," and I took him seriously. Which brings me to this: Sometimes, as decent of a human being I try my hardest to be, I lose sight of things. At my computer, checking away at submissions that need rejections, I am far away from the people who uploaded those submissions. Real people are remembered most by whatever awful sex metaphor was on the page when I reached slush fatigue. I am mostly exaggerating, of course, to make a point. At a party during my first semester as a PhD student at the University of Houston, I won "Worst Poem of the Night" for a poem I wrote in high school. I made people laugh so hard that, in the pictures, everyone looks like they're sneezing. Many years ago, though, editors and literary agents wrote back to me. When I say, "wrote back," I mean wrote back. Wrote personalized rejections. To this day, I'm convinced everyone must've known that I was just a kid sending my poems out because I received one handwritten note of encouragement after another. Sending out a standard rejection slip didn't stop one editor from writing, "Loved your cover letter½you have an overall high-energy & original voice. I am sure I will see your work in print," at the bottom. And when I mean "handwritten," I mean: 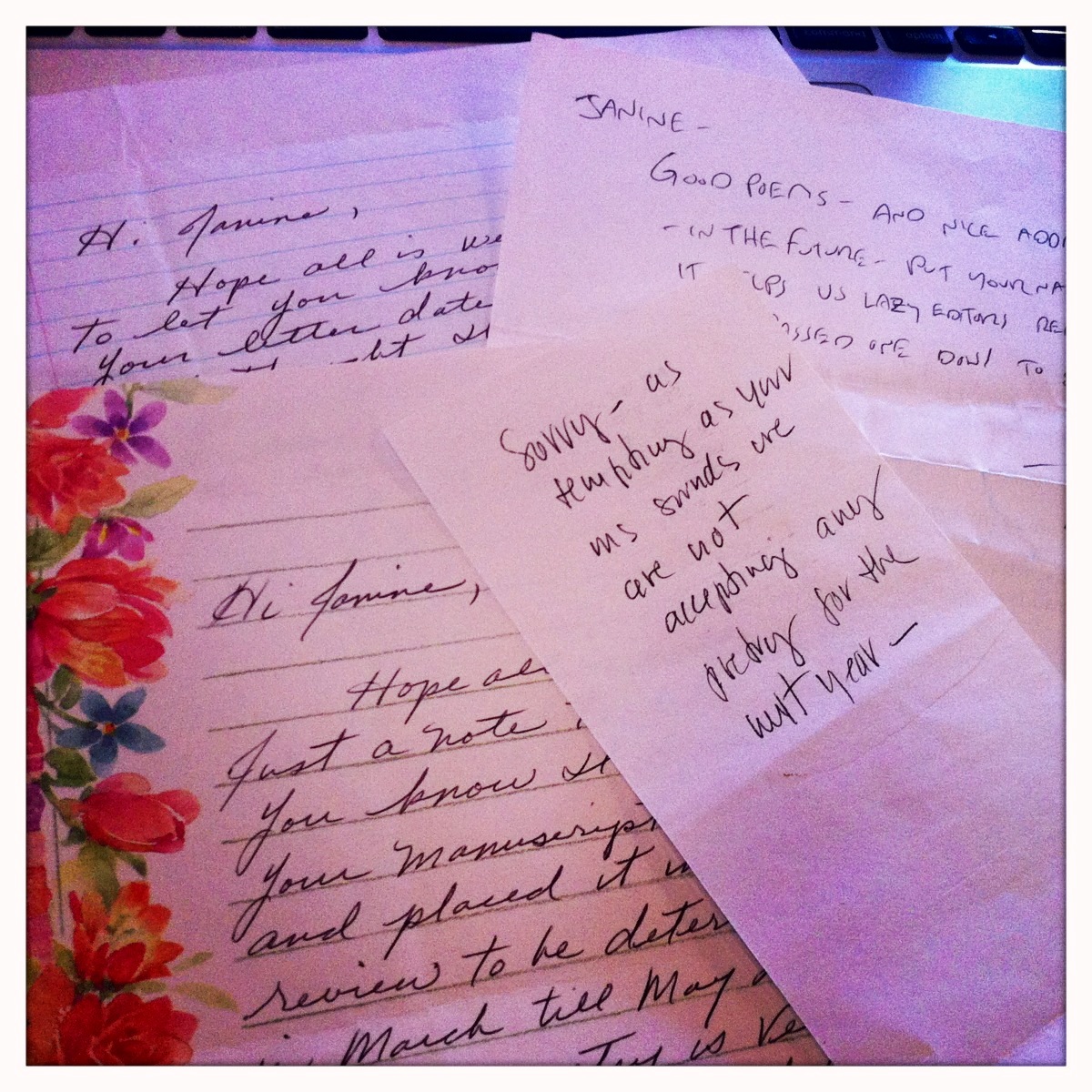 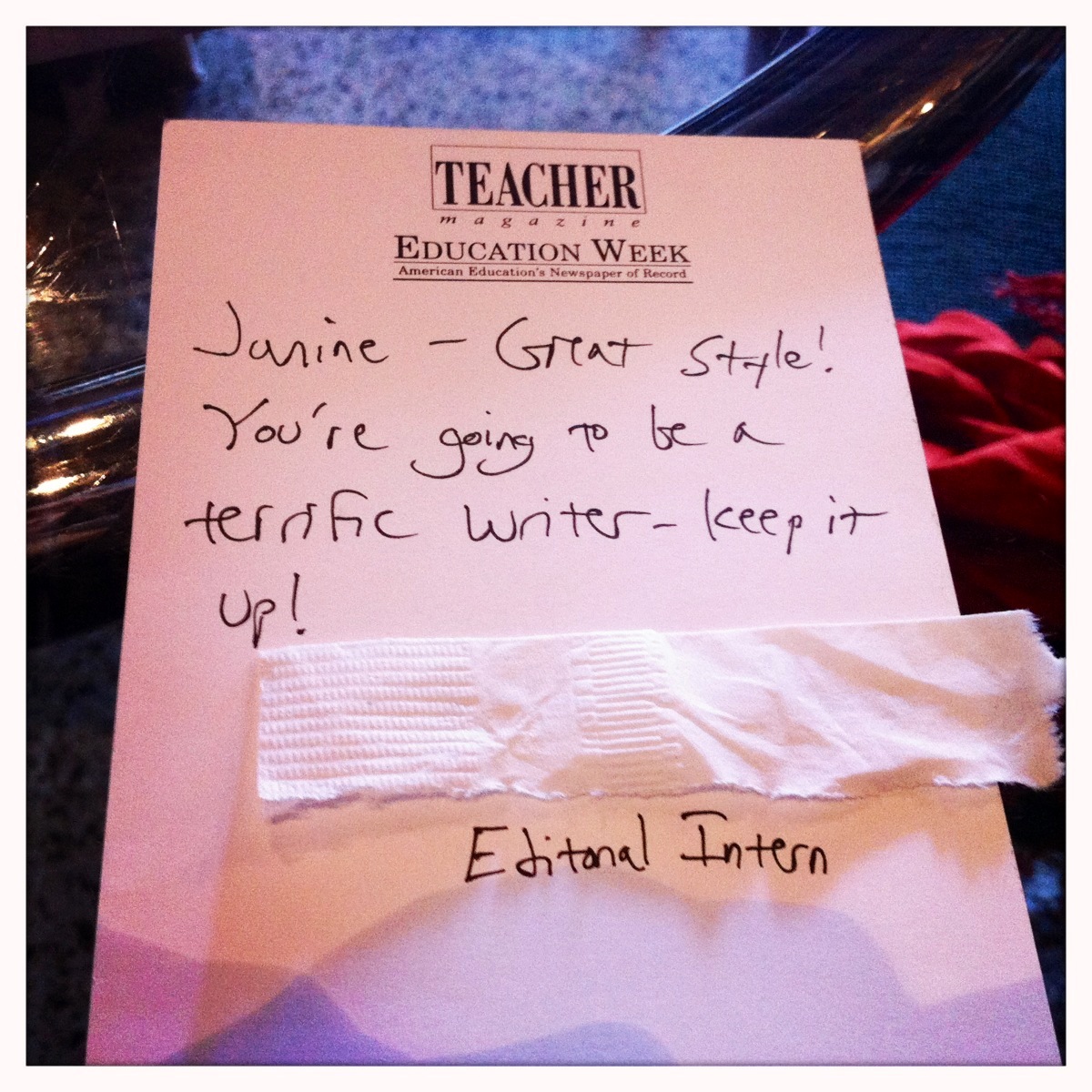 Why I had sent this particular publication my manuscript is beyond me. I suspect that I also had a copy of Writer's Market on hand because I'm looking over my stash of rejection letters now and many of them from that time are from people who don't handle poetry. Still--you guessed it--I got handwritten rejections. I even got a handwritten rejection from someone whose press went out of business. I received nothing but encouragement those years as a fledgling poet (you bet: my words from one of my cover letters) and I took it all the way to poetry school. Another editor told me once that you had to be very careful about sending rejection letters. Even getting the littlest bit of ink from your own pen on an otherwise standard, typed, rejection might give the writer the wrong idea and invite them to submit again. They were exaggerating, but also making a point. With Thanksgiving around the corner, and as my tenure as one of the poetry editors of Gulf Coast slowly comes to an end, I want to say thank you to all of those editors who, many years ago, found the kindness in them, when they had nothing positive to say about a line like: Rolling Rollin Rolli Roll Rol Ro R to tell me, "Hey--Nice address label!" And thank you, most of all, to those of you who submit your work and don't listen to me or anyone else when you receive a standard rejection letter. For a long time the only editorial regret I had was not rejecting a poem plagiarizing Pink Floyd's "The Dogs of War"--I entered my Pink Floyd phase during my junior year of high school and yelled at my CD player when I realized I'd read the lyrics the year before--and I'd like to say here that I regret not taking the time to get some of my own ink on some of those rejection letters. All of those editors and literary agents who rejected me many years ago had it right.