Zachary Martin is the Editor of Gulf Coast. His fiction, nonfiction, and humor have appeared in outlets such as Washington Square, Fourth Genre, McSweeney's Internet Tendency, and elsewhere.

What We've Been Up To

Most often, the wheels turn slowly at literary journals. Response times to submissions and queries stretch into the months; production schedules are counted in weeks instead of days; at a biannual like Gulf Coast, whole seasons go by before a new issue goes to press. This is the reality of indie publishing, which is often a labor of love that must be balanced by the day-to-day needs of editors and contributors to make their living elsewhere. Every now and again, though, things move quickly. The past year has felt like one of those times. In just over twelve months, Gulf Coast has taken all the steps necessary to become a larger and more vibrant nonprofit arts organization by merging with Art Lies, a Houston-based magazine focused on the visual arts. With the first issue of the expanded journal going to press, now seems a good time to reflect on what this means for our readers. The differences in the journal may seem subtle at first. Our name hasn't changed, and neither has our format. We'll still carry just as much fiction, poetry, and nonfiction, just as many reviews and interviews, as we ever have. This issue coming out at the end of October will have phenomenal writing from both first-time authors and writers like Anne Carson, Alan Heathcock, Patricia Hampl, Ilya Kaminsky, Lucie Brock-Broido, Melanie Rae Thon, Pam Houston, and more. Gulf Coast's commitment to bringing together established and emerging writers remains unchanged. The most noticeable difference, on the surface, might be in the sheer size of the journal. Always one of the largest in the country, we're getting even bigger, with 24 new pages dedicated to art and critical art writing. Art Lies has twenty years of experience bringing area artists, curators, scholars, and critics into dialogue with their peers around the world, and the expanded Gulf Coast plans to build on that knowledge base. For the upcoming issue, that means an article on Houston's 1971 The De Luxe Show, the first major racially integrated exhibition of contemporary art in America, and another article on Walter Hopps, a curator who came of age on the West Coast but whose most lasting impact may have been as the founding director of Houston's world-famous Menil Collection. Because Gulf Coast has long been a journal that casts its editorial eye far beyond the region we call home, the new Art Lies section will also feature work by, and articles on, artists Mary Reid Kelley (New York) and William Pope.L (Chicago). 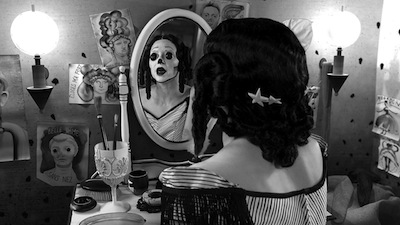 still image from Mary Reid Kelley's The Syphilis of Sisyphus (2011) But the goal of this merger goes far beyond expanding our readership or simply giving more content to long-time readers. Gulf Coast has always been "A Journal of Literature and Fine Arts," and this merger offers us the chance to live up to that name in full. More to the point, it allows us to bring into conversation visual artists and poets, essayists, and short story writers. It's our belief that that's a conversation that doesn't take place nearly often enough, and so our new issue will also include a roundtable on the graphic novel, and ekphrastic poetry by authors such as Donald Platt, Adam Vines, Matthew Pennock, and Angie Estes. What may be less apparent when turning Gulf Coast's pages, but is no less important, are the ways in which this merger dramatically alters us as a nonprofit organization. We are now larger, in both staff and budget. This means we have the capacity to increase the honoraria we provide to the artists and writers who appear in our pages. This means the annual Houston Indie Book Festival and Menil Community Arts Festival, sponsored by Gulf Coast, held together each year in April and attended by thousands, can continue to grow by leaps and bounds. This year has been a busy one, moving at a speed most literary journals are unaccustomed to, but we're confident the hard work of the previous months has ensured a stronger future for us as an organization and, most importantly, a better and more enlivening reading experience for our subscribers. If you're already a subscriber, we hope you'll keep your subscription current to see what the new Gulf Coast has in store. If you don't yet subscribe? We think now is a good time to do so. Great things are coming.