Sara C. Rolater is a graduate of Rice University and an MFA candidate at the University of Houston, where she is an assistant editor in fiction for Gulf Coast. She has been a fellow at the Writing Immersion Retreat in Bali. Her fiction has appeared in Ghost Town. Check out her Facebook status collage poetry at plagiarizemyface.com.

The Advantages of Plagiarism

No, this is not some lurid account of the time I recapitulated someone else's work in such a thorough fashion that I deluded even myself as to my role in its authorship. (If you would like to read such a tale, pick up a copy of Tobias Wolff's Old School, in which Ayn Rand makes a guest appearance. And if you've ever read anything by Ayn Rand, read this.) Rather, this is about letting your creative impulses open up new avenues, and how the plethora of written material already floating around the ether can help you do that. You may respond to other work in the nuanced (anti-)fan-fictional mode of Wolff and Saunders--or you may plunder more directly. We've all heard the quote about lameass writers asking politely and borrowing, while badass writers just up and take that shit. Or whatever it is. 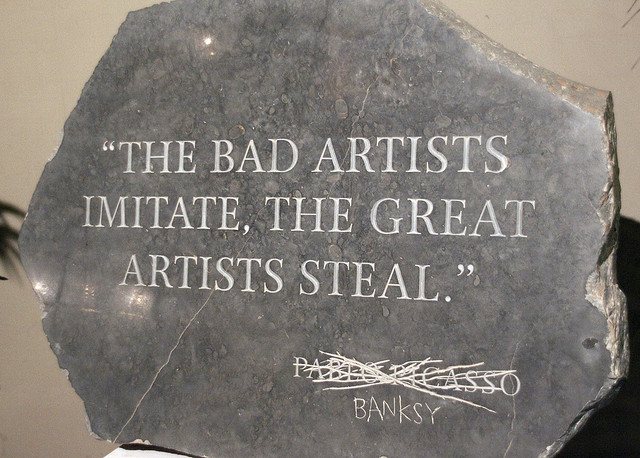 I found myself pondering this platitude after drafting a story from the first-person point of view of a male veteran. (I am neither male nor a veteran.) It was not the type of story I ever expected to write, but for a brief period between working and grad school, I cleaved myself from all commitments and pursued my natural interests. One day I stumbled across the Iraq War section in the library and suddenly the subject consumed me. Perhaps I was seeking a literal scary place (combat) to take the edge off my figurative one (living off of very little money), or in a time of drifting I craved to explore meaningful action. Whatever it was, the military milieu was fascinating, seemed like every bad job I'd ever had--horrible bosses, spools of red tape, blatant exploitation--amplified tenfold by the whole lives-at-stake thing. At work your immediate superior might be snide, backhanded, even outright nasty, but if s/he were to scream in your face that you were a bigger waste of sperm than what wound up as crust on your father's sock, there's a good chance s/he'd get canned. Which is to say that the experiences of a frontline grunt made for perfect story material, inherently dramatic. But in producing the draft I felt like a voyeur, a tourist--like I was committing emotional plagiarism. A year later, in grad school, with nothing else in the pipeline for workshop, the task of getting that piece reader-ready, the prospect of other eyes appraising the authenticity of its physical detail, the pressure to do the material justice in order to justify my crime (the whole emotional plagiarism thing) proved daunting. The questions why the hell am I writing this, and who the hell am I to write this, that were mere background din during the first drafts, now came screaming to the forefront. I would be exposed as a fraud and a hack, as self-centered, capable of only a narrow frame of vision. I considered what my life would be like if I quit writing altogether, the sheer pleasure I could then take from reading literature instead of the spasms of insane jealousy and inadequacy, the free time that would be mine, the ease of existence. It took Denis Johnson nine years to write Tree of Smoke. Sometimes that seems noble. Other times it makes me want to kill myself. Not long before my story was due, the writer David Shields visited UH. Shields described feeling an exhaustion with the conventional construction of fiction, a sentiment I identified with more than I wanted to. ("Okay, I've got these people," he said, or something like it; "now I have to give them jobs, a house. I have to describe what they look like½") For him, the parameters of narrative had become more confining than functional. He had become more interested in what he called collage, yet what many others, such as Stephen Colbert, still insisted on applying the p-word to. What one person calls plagiarism, another calls creative license. For me, looking at it as the latter has proven productive. Shields opened up a new perspective: we must not look at ourselves as working in the shadows of giants; rather, they have provided us with shoulders to stand on. 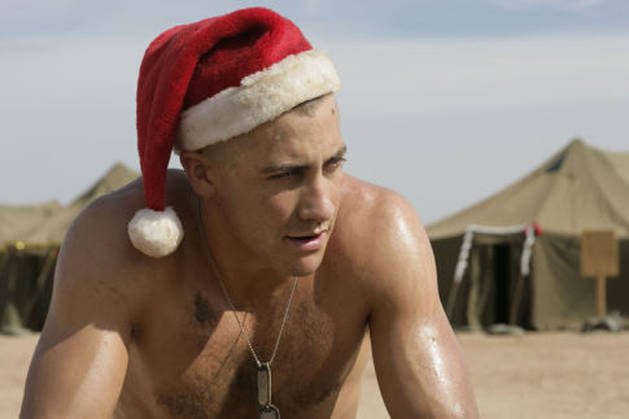 By my desk, next to a cardboard cutout of Jake G, I've gathered a stack of war-related books of every stripe--novels (Heller, Hemingway, Mailer, O'Brien, Remarque, Vonnegut), memoirs (Castner, Marlantes, Swofford), tagalong journalism (Frederick, Junger), and poetry (Turner), a treasure trove of (white male) firsthand accounts. When stuck, usually regarding descriptions that might easily tip into the melodramatic (which usually involve blood), I pick one up and thumb through. Pre-Shields, thumbing through this stack was depressing (I can't say this better than this guy has! Or, You can't make this shit up!). Post-Shields, I saw things differently. What if, I thought, I pieced together a new war narrative using pieces of the old ones? I could be the Girl Talk of the great white war writers. I'd layer them and uniquely channel their unique resonances. The idea of working with others' words took some pressure off. With collage you already have the clay to work with, can take pleasure in the sculpting itself. While such a combat jigsaw puzzle was too involved to undertake before workshop, plagiarism proved productive in other ways as I continued to revise the original story. I'd steal lines from the pile of books here and there as I was working, then later cut or alter them beyond the point of obvious recognition. They provided a springboard of authenticity, believability, verisimilitude, whatever you want to call it, to plunge forward. (Kim Addonizio, in her book Ordinary Genius, offers a similar exercise in which you take the first line of a poem you like and write your own poem from it.) Shields often cites sampling in music as a precedent for collage when describing his desired mode of literary "appropriation." Around the same time hip hop was emerging in the mainstream two and a half decades ago, David Foster Wallace (who would himself go on to co-write a book on the then-nascent genre) was about to publish his postpostmodernist pastiche Girl With Curious Hair when an editor happened to notice that some of his dialogue had been lifted verbatim from a Letterman interview. Then, as Wallace's biographer describes it, "The publishers' lawyers½wanted the source of every fact and assertion, paragraph by paragraph. Howard [Wallace's editor] remembers it as 'the literary equivalent of a strip search.'" In this process Wallace admitted to "'at least a line a page that's either lifted or I just don't remember.'" The publisher ended up dropping the book. Years later, Wallace won a lawsuit in which a (fictional!) character's namesake sued him for libel. Progress? Fuck tha police. (I've always wanted to say that.) Steal from other writers, from your mother, from multimedia. Theft can be a productive way of sifting the info we're inundated with. No one's sitting around waiting to give you permission to write, steal, or do otherwise. ("Existence is warfare," Shields, or maybe someone else, has said.) But there may be a loophole, a way to have our cake and eat it too (because what the hell else were we going to do with that cake?). Shields eschews it, but you may choose to cite your sources. Nick Flynn is one writer who documents the sources of his creative inspiration (including lines lifted directly from other poems, films, etc.) and includes them in the backs of his books with a meticulousness that might pacify the lawyers who kicked Wallace to the curb, possibly even Colbert himself. Just as the media alters that which it monitors, when you filter what others have said, it becomes something new, a whole greater than the sum of its parts. Writing is, after all, an ongoing dialogue. Playing with others' words has made my own work feel less lonesome and more lively; has kept writing, as Kim Addonizio has it, "not a means to an end, but a continuing engagement with being alive."