Justin Chrestman was born in El Paso, TX and raised mostly in New Mexico. He has an MFA in creative writing from New Mexico State University. He currently lives in Houston, Texas where he is teaching and pursuing a PhD in fiction and literature at the University of Houston, and is an assistant editor in fiction for Gulf Coast. He has been previously published in the Owl Eye Review, and his story ???The Monster?? is forthcoming in Puerto del Sol.

Charles Dickens' "A Christmas Carol" was published in full 170 years ago this last December 18th. I'd forgotten a few of the less familiar aspects of the work. For example, Scrooge's journey with the ghost of Christmas Present to a lighthouse and a ship at sea or the narrator's panting, detailed physical descriptions of buxom women. Perhaps this is a testament to how utterly immersed the story is in the collective imagination of the English Speaking world, or the various adaptations I've seen over the course of my life, but most of the material felt deeply familiar. Most familiar of all was the malaise I experienced upon witnessing Scrooge's epic transformation from callous bastard into jubilant benefactor. Maybe it's the raging Victorian sentimentality. It's not enough for Scrooge to keep his word to change. In fact, Dickens insists, "Scrooge was better than his word. He did it all, and infinitely more½He became as good a friend, and as good a master, and as good a man as the good city knew. Better than any man in the whole good old world." 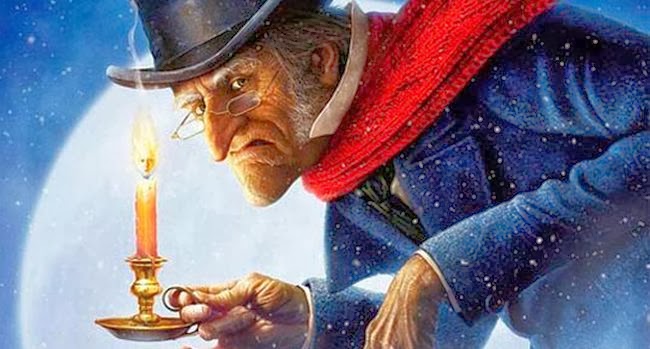 I can't read Dickens anymore without thinking of George Orwell's essay about him. One of the more curious aspects of Dickens, according to Orwell, is that those of varying political ideologies want to "steal" Dickens. The conservatives want Dickens to be conservative and the Marxists want him to be a Marxist. Orwell doubts he can be said to definitively belong to these or other groups that want to claim him. He points out that Orwell, especially in his early work, criticizes laissez faire Capitalism, but never suggests or implies that it is necessary to change the economic system. Rather, a "good rich man" character "acting the fairy godmother" intervenes in the lives of less fortunate characters to save them. So Scrooge becomes a better man; he rescues the Cratchit family and especially Tiny Tim from poverty and death. But meanwhile the prisons and workhouses for the poor that Scrooge mentions at the beginning of the story grind on. The problem then isn't that there are people at opposite extremes of wealth and poverty but that those in Scrooge's position aren't kind enough to their underlings. Implicitly, the story doesn't argue for reform so much as it argues for noblesse oblige. The modern corollary that first comes to mind on this is a reality show called Undercover Boss. About three years ago they aired an episode focusing on Frontier Airlines. I actually worked for Frontier Airlines, a Denver based airline, for five years as a reservations agent. The company had two call centers, one of these in Las Cruces, New Mexico where I lived for many years. In a town without many employment opportunities beyond minimum wage jobs, Frontier was a job that paid a wage I could just get by on. At its peak, the call center employed over two hundred people. Two years after I left the job Frontier Airlines to attend graduate school, the company declared bankruptcy and was bought out by Republic Airlines. The call center in Las Cruces was shut down, the remaining one hundred employees laid off. The episode of Undercover Boss aired almost a year after the merger and lay-offs. It begins, like the others, with a bombastic voice over that claims "Public distrust of wealthy CEOs is at an all-time high!" Hence, CEOs seek "radical ways to find out what's going in their own companies." Bryan Bedford, the CEO or Republic and Frontier, is introduced at the opening of the episode. The narrative strategy that begins the episode is somewhat the opposite of Dickens' strategy, as it establishes pathos for the CEO. Bedford lives in a faux castle and has almost enough children to populate two basketball teams. He informs the viewers that he and his wife has long since given up on contraception, instead trusting to God to determine how many children they should have. Bedford is intensely pious, a characteristic that becomes an important thematic thread throughout the episode. For a certain kind of audience, I suppose this might build credibility for Bedford. I'll admit that I am not part of that target audience. I visited the center on the last day it was open, and a friend there informed me that after they were bought out he received an email from the new CEO informing employees that they should pray that everyone be able to keep their job. "That's when I knew we were screwed," he said. Bedford goes "undercover" pretending to be a new employee competing for a job at Frontier in front of a camera crew. Under the supervision of a current employee, he attempts to do a number of the tougher jobs in the industry: cleaning airplanes, being a flight attendant, loading baggage, and emptying airplane latrines. This is one of the main appeals of the show, watching the boss attempt rank-and-file jobs within his own business and fail. Of course, Bedford struggles to keep up the rigorous pace of loading luggage and can't. He manages to spill fluid from the toilet on his own face. In between work segments Bedford talks with the employees about their lives. Multiple employees describe the economic hardship that has come along with the merger which included a 10% pay cut. One woman also informs Bedford that her son was murdered. At the climax of the show Bedford reveals his identity and rewards the various employees he's met for their hard work. Scrooge-like, he showers gifts and awards on this employees. He provides money for college funds, grants vacations, and offers to name an airplane after the woman's murdered son. He follow up with an address to several employees convened in a hangar and vows to roll-back the pay cut over the next three years. You can find articles here and there about changes to corporate policy that have stemmed from Undercover Boss, but I'm pretty hard pressed to find out if Bedford's promised reforms went into effect. And does it matter, now that he's no longer CEO anyway? And the trouble, for me, isn't necessarily with the gifts that are distributed to hard-working employees who are having a tough go of it. The trouble is that these three employees are perhaps representative of hundreds or thousands more employees that are also struggling, that didn't make it in front of the camera, that are reaping no new reward. And those co-workers of mine who were laid off after the buyout are, of course, not on-camera. And there is no word of their hardships, there is no mention of the closing of some obscure call center in some obscure desert city at the edge of the country. Why would there be?

The truth is, even if the cut in pay were scaled back, I couldn't consider myself moved. Because, among the employees assembled in the hangar were Bedford makes his address, none of my previous workmates are among them. Of course, there is no mention of a call center in Las Cruces New Mexico. There is no mention of those I knew who were laid off from their jobs or forced to relocate, no effort to rehire them, or reopen that center. Why would there be? Like most reality shows, Undercover Boss seems scripted. The purpose of the show seems less to educate the CEO about the state of their own company than to be a commercial for the company these executives represent. Of course, we don't have the benefit of the ghost-of-what-may-be to tell us that Frontier would be bought out by yet another corporation, or that more layoffs, numbering in the thousands, were on the way for that company. Or that Bedford would have resigned as CEO within a few years. Or that Republic was now looking to sell Frontier Airlines again. I haven't been able to find out whether the pay cut was ever restored, though in one interview Bedford notes that unionized employees had already been returned to the their previous salaries before the episode even aired. During my time at Frontier an attempt to unionize the call center was strongly discouraged by management. We've come a long way since the laissez faire Capitalism of Dickens' day. We still have further to go.