David Tomas Martinez is a PhD candidate at the University of Houston, and Reviews and Interviews Editor at Gulf Coast. His first collection of poems, Hustle, will be released by Sarabande Books in 2014.

Sometimes there are unexpected pleasures that give surprising depths of delight. And not in a Christmas Eve kind of way--me a robust nine years old, knowing my parents bought me an Atari, so I stayed up all night, tossing and twirling in my racecar bed, the plastic feet on my onesie creating a small electrical charge that only excited me further. Nor do I mean in the I have been trying to date this woman for months kind of way but she thinks I am too ghetto; however, she has finally agreed to go with me on a date, and not the study "date" she skipped because I said we should meet at Hooters, and so maybe, just possibly, I should ask my dad for a condom--because you never know. These were all exciting moments, but the Texas Book Festival is a memory I will equally hoard. First, I was in Austin. A very cool city. A very hip city. There is a feeling of vivacity and snobbery that I haven't felt since Southern California. I like it. Second, I had a press pass. There was no need for me to have a press pass. It didn't get me into any parties or special events. But as I walked, in a rose-flowered shirt, vest, and bright green retro tie, I saw people notice the press pass and attempt to figure out my identity. Nobody. Obviously. We all want a little fame, our 15 minutes of spotlight until we are beaten back to the mundane life we lead. It was nice to pretend for a while. Third, people were handing out stuff: I got buttons, bookmarks, pamphlets, business cards, bags full-o-stuff, a whistle, and a lot of encouragement that there is still a very strong reading base left in the world. It was great to see the multitudes of topics and people hawking their words and ideas. Fourth, I saw again/met/flirted with/harassed/mind-boned/laughed with/drank beer with a bunch of cool people. Gustavo Arellano. Matt Hart. Emma Straub. Rosecrans Baldwin. All of these people were really cool and I had some funny conversations. I was also given a fifth of Starlite Vodka in exchange for three American Spirits, so I rambled around the Authors Party given by the Texas Book Festival with a full bottle looking like I couldn't remember where I parked my cactus. I did my part to keep stereotypes alive that evening. But the moment I will remember the most is the Texas State Capitol building, specifically the painting by H. A. McArdle, "Dawn at the Alamo." The Texas State Capitol building carries an impressive visage, being a huge building. It took me a few minutes to get into the building, but after I wrestled through the metal detector, I was impressed. Marble everywhere. Multiple floors. I went to the Senate's room by accident. I saw life-sized paintings of Lyndon B. Johnson and Confederate generals and quite a few figures that I didn't recognize. As I turned, I saw the "Dawn at the Alamo" painting and had a Countee Cullen riding-to-Baltimore moment. 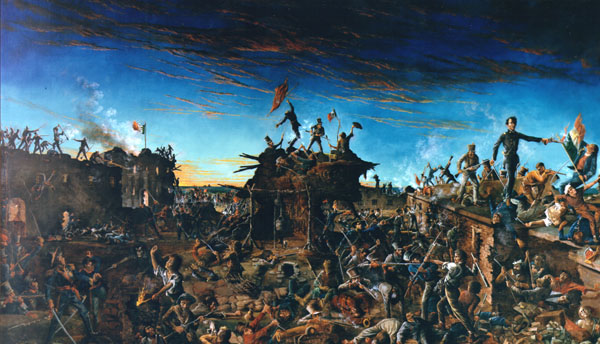 The painting is a force of movement and action, as this painting depicts the Battle of the Alamo. But one part of the painting stood out for me. A proud Texas soldier is shooting one man and stepping on another man in the right side of the painting. The soldier looks magnanimous. Virtuous. Behind this soldier is one of the most impressive caricatures of a Mexican I have ever seen. Greasy. Smirking. Hunched. Mustachioed. And about to bayonet the soldier in the back. This depiction reminded me of the xenophobia that Americans have, that we all can have, and that as much as I am a humanist and believe in the greater goodness of people, the dominant narrative frequently contradicts my perspective. This did not make me angry, but it didn't make me feel like I was represented either. Keep fighting, brothers and sisters of various struggles; we all could sure as hell use it.