J.S.A. Lowe currently serves as Online Editor for Gulf Coast, and is a PhD student in creative writing at the University of Houston. Her poems have appeared or are forthcoming in Black Warrior Review, Chicago Review, DIAGRAM, Salamander, and Salt Hill Journal. Cherry-emily, a chapbook, will be published by dancing girl press in late 2013.

Dear Editor's Blog Readers, Most of us here at Gulf Coast and the University of Houston are gripped in the throes of a collapsing semester, its deadlines and crunch-time. We're writing papers, editing copy, grading portfolios, and trying frantically to get it all done before next Friday. We try not to write too much about all this for fear of boring you, of taxing your patience with our decidedly small and privileged graduate-student lives. But yesterday's events have shaken all of us here out of our finals-week narcissism. Many of you were personally affected; at least one of our editors knows a child who was brutally killed, knows the parents whose lives may never recover from that evil. And even those of us who don't know anyone who was lost, we too sat in front of our computers, compulsively reading scraps of news as they unfurled--bewildered, fragmentary bulletins from a chaotic, indescribably terrifying scene. We know more now than we did at first. We know that the shooter was, as shooters always are, deeply and profoundly unwell. He is dead too, a victim of his own misery and senseless hatred. We know that he chose to attack a kindergarten--the ultimate sanctuary of innocence and safety, in our culture. We know that he used a semi-automatic rifle, and that the victims were shot methodically and repeatedly. These details are stomach-turning and heart-wringing, and they should be. We should be aghast. We must weep. It is our humanity that stares at the front page of the morning paper and curls up inside us shuddering as we imagine our own children, our own family members, our own mortal bodies. And then, because we have brains as well as hearts, that voice inside us demands why, and how did this happen; and what, in the words of Lenin, is to be done. Because something must be done. Although as a country we seemingly cannot agree on what. And it is not in the province or purview of a literary magazine to, as some say, politicize the tragedy. The Internet is fiery with debate about gun control and mental illness; the arguments can be found easily, and there is no need for us to repeat them here. At such moments as these, confused, heartsore, feeling wordless, we turn to literature. Conservative columnist Ross Douthat quotes extensively from The Brothers Karamazov--Ivan's famous "innocents" speech, in which he concludes that heaven isn't worth the suffering of a single child. Editor Don Share, of Poetry Magazine, shared with his social-media followers Bob Hicok's moving poem "In the Loop." We found ourselves thinking involuntarily of both E.M. Cioran and Simone Weil. In On the Heights of Despair, Cioran writes:

Why is it that only some people suffer? Why are only some selected from the ranks of normal people and put on the torture rack? Some religions maintain that God is trying us through suffering, or that we expiate evil and unbelief through it. If such an explanation can satisfy the religious man, it is not sufficient for anyone who notices that suffering is arbitrary and unjust, because the innocent often suffer most. There is no valid justification for suffering. Suffering has no hierarchy of values.

And Weil, who in every way she could think of immersed herself in the experience of human suffering, and the question of how we must respond to it--Weil wrote:

That divine love which one touches in the depth of affliction, like Christ's resurrection through crucifixion, that love which is the central core and intangible essence of joy, is not a consolation. It leaves pain completely intact.

In that spirit--knowing we can do nothing to ease the pain, only wanting to reach out and say: we are here, we are at your side, we feel the echoes of this pain with you--we at Gulf Coast express our sorrow and our support. We, along with the rest of our country, apologize for being complicit, for being part of a moment in history which not only permits this to happen but somehow fosters it. We bitterly regret not doing whatever it is that needs doing, needs doing urgently, to make this stop. We lament that human beings suffer, we are sorry that we are so wordless in the blank face of that pitiless suffering; and above all, we grieve that we cannot agree, as a culture, as a nation, what action to take, right now, immediately, so that these outbursts of weaponed violence become a thing of our already-troubled American past and are never repeated, never again, not once. Our hearts and our prayers and our anger and our shock are with the families of Sandy Hook, right now. And when we come out of that shock, please, let us each take the action we feel is the right one. Because after the spasms of wordlessness and paralysis, after the suffering, there is work to be done. And we continue to believe that literature, that language and words and articulation, can help illuminate the path toward that good work. May everyone be safe and well--today, and for the rest of the year, and into the next. 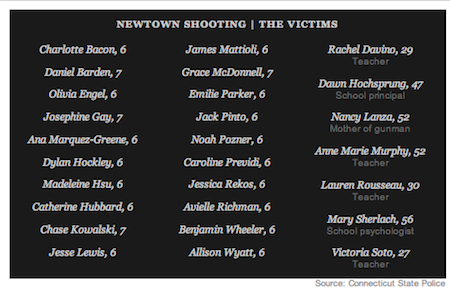