Sam Mansfield grew up and attended college in New Hampshire. He is currently an MFA candidate in poetry at the University of Houston. His work has been published in Explosion-Proof Magazine.

Red Bull Gives You...a Sense of Your Own Staggering Insignificance?

"Sometimes, you have to get up really high to understand how small you are. I'm going home now." With these words, on October 14, 2012, Felix Baumgartner stepped off the dock of his helium balloon capsule and plummeted twenty-four miles to Earth. He fell farther and faster than anyone on record had ever fallen before, breaking the sound barrier on his way down. It took him roughly nine minutes. I spent those nine minutes sifting through short fiction pieces for Gulf Coast's recent Barthelme contest. Few activities could be considered less badass, except maybe flossing. I also flossed that day. So I may not be the best-credentialed arbiter of what's daring. Still, what struck me most of all about Baumgartner's death-defying feat was the tepidness of his language. It was glib and flyblown. You could hear, behind his words, the bogus impulse to downplay what he must have considered the tremendous import of his act. Baumgartner wasn't claiming to be making any giant leaps for mankind (at least, not out loud). Rather, he seemed to be declaring a humbler, more personal motive. His argument went something like this: 1) I'm really no big deal; 2) I need reminding from time to time; 3) One of the only ways to accomplish this is by jumping through the sound barrier. Baumgartner was trying to paint his highly publicized pursuit of a adrenaline rush as a noble quest for self-knowledge. I don't believe him for a second. I think he went up there to feel big. For those of you readers who don't have your own custom-made spacesuits, I have good news: You don't need to jump from the stratosphere to feel small. It's possible right here on the ground. Here are three easy ways to do it: • Buy the very cheapest telescope you can find and point it upwards • Walk through a famous cemetery (e.g., Arlington or Père Lachaise) • Bike through Houston As you can imagine, it's difficult to break a world record doing any of these things. Or get sponsorship from a major vendor. Or gain international recognition. So no, I don't think feeling small is what Baumgartner was up to. 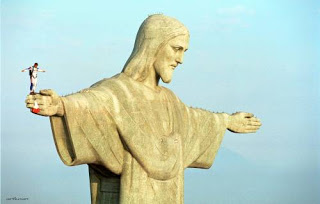 But is it so wrong to want to feel big? Dante probably wanted to feel big. Emily Dickinson probably wanted to feel big. Homer had to have felt big, to contain the stories he contained. Writers are obligated to be up to more than this. Nobody wants to read 300 pages of unmitigated self-aggrandizement. Yet, many writers create out of the desire to feel big, at least a little bit. I think it's when we deny any aim of self-aggrandizement that we get into trouble, that we lapse into platitudes. In George Orwell's essay "Why I Write," he asserts that there are "four great motives" for writing. At the very top of his list is:

Sheer egoism. Desire to seem clever, to be talked about, to be remembered after death, to get your own back on the grown-ups who snubbed you in childhood, etc., etc. It is humbug to pretend this is not a motive, and a strong one.

Of course, sheer egoism, however candidly admitted, can only take you so far. But I'll take it over humbug any day.