Arnea Williams was born and raised in Beaumont, Texas. She received her BA in photography from Sam Houston State University, and is currently an MFA student at the University of Houston School of Art in photography and digital media. Her work centers around subcultures of minority communities within urban landscapes, with a consistent emphasis on the female subject matter.

Five decades of artistry which may otherwise have been disregarded--that's what senior curator Valerie Cassel-Oliver showcased through her selection of over forty exemplary artists in Radical Presence: Black Performance in Contemporary Art (November 17, 2012-February 16, 2013, Contemporary Arts Museum Houston). Acclaimed as the first comprehensive survey of performance art dealing with the notion of blackness, the exhibition provided a loose framework to generate dialogue concerning a black performance tradition spanning from the 1960s to the present. Given the experimental nature of performance art, this exhibition incorporated works ranging from video and photo documentation of performances to performance scores and installations, as well as artworks created as a result of on-site performative actions. A list of related events (appropriately scheduled to run the length of the exhibition) strongly encouraged audience participation. Of particular interest was a performance on opening night by multimedia artist Tameka Norris. This characteristic work explores the contradictions inherent in contemporary society and culture. 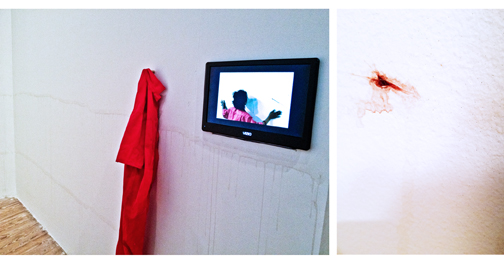 Tameka Norris's "(Untitled) Performance" (photograph by Arnea Wililams) In a re-enactment of her 2012 performance, Norris, barefoot and wearing an orange jumpsuit, cut herself and then marked the gallery walls in theatrical fashion, engendering a new meaning to the act of painting. This performance challenged the artist's threshold for pain while simultaneously challenging the audience's ability to bear witness to such self-inflicted discomfort. At the conclusion of the performance, the walls were left stained with faint, though linear, blood-red markings, representative of what is presumed to be Norris's literal bleeding for art's sake. This act questions and examines the commitment of the artist to the work, particularly in relation to how the viewer interprets what is being presented as art. This challenging of what constitutes an artwork is a recurring theme explored within many of the works organized by Cassel-Oliver. The spotlight of this exhibition seemed to fall upon William Pope.L, who addresses contemporary issues such as race, class, and consumerism. His approach is dark and biting, distinguishable through its extremities of sarcasm. In the installation Eating the Wall Street Journal (2000), Pope.L used unconventional materials, including a glorified ceramic toilet, milk containers, ketchup, and mounds of discarded newspapers. Atop this structure, his partially nude body appeared to be covered with some form of powder, possibly flour, as he digested and regurgitated the Wall Street Journal. These cosmetic choices, alluding to purity and whiteness, specifically address how we consume and deconstruct the news presented to the public at large. Other artists explored culturally embedded issues, including Xaviera Simmons, Adam Pendleton, David Hammonds, Lyle Ashton Harris, Jayson Musson a.k.a. Hennessy Youngman, Benjamin Patterson, local artist Jamal Cyrus, and the renowned Carrie Mae Weems. This cumulation of artists speaks to heightened questions and awareness of both political and social issues prevalent in our world today, exclusively as related to the black community at large. These works employ stereotypes, language, and historical references as a means of challenging what we know as "blackness," "black art," or "black performance art," and the future of black visibility within a contemporary landscape. The decision to curate a show solely exploring black performance art in itself challenges conventional norms of what viewers would anticipate to be confronted with upon entering a gallery space. This leaves one to wonder whether the African-American ethnicity of Cassel-Oliver was the driving force behind a show whose topic might not have been otherwise broached. 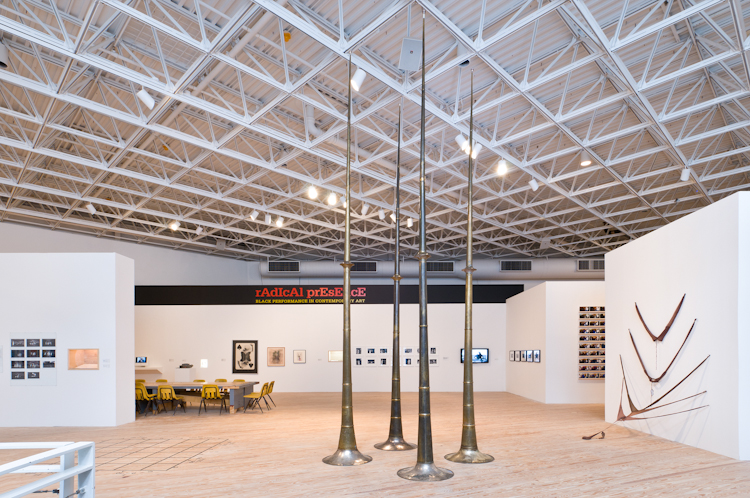 installation photographed by Jerry Jones Radical Presence may or may not have generated dialogue, which is, of course, contingent upon the viewer's vested interest, background, cultural standing, societal hierarchy, and the extent of his or her art historical knowledge of performance art. Despite these categorical factors, the exhibition undeniably situated provocative works in plain sight with the intent of providing a platform to create both awareness and curiosity. Radical Presence took the viewer on a journey, making connections between artists, while deconstructing elements within their work as they directly relate to both past and present contemporary practices.