Caitlin Maling has published and performed poetry widely through Australia in places such as Blue Dog, Westerly, Quadrant, Going Down Swinging, The Australian, The Sun Herald Extra, and Fremantle Poetry Festival among others. This year she will be featured in Best Australian Poems 2012. She has also been the winner of the John Marsden Poetry Prize and has twice been awarded Varuna Center Fellowships. In 2012 she was awarded the Department of Culture and the Arts (WA) International Scholarship for her MFA studies at the University of Houston, where she is in her second year.

On homesickness, the other kind of football, and how to be yourself without expanding each use of vernacular into a sentence of glossary. • Dear Americans (and other non-Aussie readers of Gulf Coast), I'm writing to tell you that last Saturday the Swans beat the Hawks in a nail-biter at the MCG to become the 2012 Premiers. It was (potentially excepting Cup Day, ANZAC Day or Australia/Invasion Day) the biggest day in the Australian calendar of events, especially after our swimmers performed so poorly at the Olympics and the Ashes aren't on until 2013. Are you following me? No? 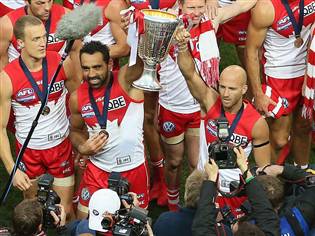 Well, it's the time of year I feel most homesick. When all y'all (if that's how you say it) down here in Texas are talking about fall, and I am reminded yet again how being a native English speaker doesn't mean anything outside the country of that nativity. Back home in Perth, right now, people are gearing up to go to Scabs or Cott or Trigg and the Freo Doctor has come back from his winter break and it's spring. Or more precisely it's Kambarang, the Nyoongar season of the warming months of September and October. As a poet I'm concerned with the precision of language and, as an Aussie poet living in Texas while writing about Australia, on a daily basis I'm confronted with the problems of how precisely to communicate my country without having to expand each use of vernacular with a sentence of glossary. From translation theory I can tell you there is no easy semantic equivalent for the word outback. This is not just a poetry problem. On a bus in Chicago I was talking with my husband (another Australian) when a well-intentioned lady leaned over to say: I just have to ask what language you're speaking to which I answered: Australian, no wait--English (she then went on to say "I could have sworn you were speaking Irish" which is neither here nor there½). Last week I had Aussie visitors from the Berra and we spent a long time in a diner together, first trying figure out exactly what half-and-half is, the rest just talking about the differences between Australia and America. Afterwards I realized half the fun of the night was simply being able to use words like I would back home, to be able to say arvo without anyone thinking I was talking about an avocado. I also attended two readings in the past week where questions of language and identity were raised in a much more noble and important way than my nostalgia for the colloquial. At separate readings Junot Díaz and Sandra Cisneros both stressed the importance of a right to language, and to your own speech, as political action. My problem is not one of not being heard, or of having the privilege of language. Essentially I acknowledge that I'm complaining about replacing one anglocentric masculinist English with another. But what does this have to do with footy? Well you see I tried to give up footy. I said it was patriarchal. I said it was Ben Cousins and Sam Newman. I said it was colonialism. I said it was the over-emphasis of the physical at the expense of the intellectual in Australian society. But despite all this, I'm still West Coast. My footy code, like my vernacular, with all its faults and inherent inequalities, is my home. One I feel a little sick for missing, one that I'm trying the best to heal in my poetry, but one that to me is, as we say, fully sick mate. Thanks for listening, Americans. I'm going to leave you with a poem by the Australian best-selling poet Bruce Dawe, one that I hope transcends any need for a glossary. Cheers mate, Caitlin. Life Cycle For Big Jim Phelan When children are born in Victoria they are wrapped in the club-colours, laid in beribboned cots, having already begun a lifetime's barracking. Carn, they cry, Carn½feebly at first while parents playfully tussle with them for possession of a rusk: Ah, he's a little Tiger! (And they are½) Hoisted shoulder-high at their first League game they are like innocent monsters who have been years swimming towards the daylight's empyrean Until, now, hearts shrapnelled with rapture, they break surface and are forever lost, their minds rippling out like streamers In the pure flood of sound, they are scarfed with light, a voice like the voice of God booms from the stands Ooohh you bludger and the covenant is sealed. Hot pies and potato-crisps they will eat, they will forswear the Demons, cling to the Saints and behold their team going up the ladder into Heaven, And the tides of life will be the tides of the home-team's fortunes --the reckless proposal after the one-point win, the wedding and the honeymoon after the grand-final½ They will not grow old as those from more northern States grow old, for them it will always be three-quarter-time with the scores level and the wind advantage in the final term, That passion persisting, like a race-memory, through the welter of seasons, enabling old-timers by boundary-fences to dream of resurgent lions and centaur-figures from the past to replenish continually the present, So that mythology may be perpetually renewed and Chicken Smallhorn return like the maize-god in a thousand shapes, the dancers changing But the dance forever the same--the elderly still loyally crying Carn...Carn½ (if feebly) unto the very end, having seen in the six-foot recruit from Eaglehawk their hope for salvation.