Thomas Calder recently recieved his MFA from the University of Houston, where he spent these last three years writing and revising a novel that he hopes to share with the world real soon.

On Panda Bears and Death (and Why Neither Matters)

When we lived in Asheville, my wife Tatiana worked at a school. She also volunteered on a farm most weekends. One day she took her students to the farm for a fieldtrip. The property was owned by an older man named Paul. As Paul was readying the kids for a little hike, one of the boys started to panic; a first-grader, he was worried he'd get attacked by a bear. Paul told the kid: "The good news is we're all gonna die one day, so really you have nothing to worry about."

When Tatiana told me this, I naturally asked: How did the kid handle the news? To my surprise, the kid's response was a relieved nod. They went on the hike.

There's nothing exceptional about being a writer. It's a privilege to pursue your passion. What is exceptional, however, is the pursuit. The older I get, the more bears I see, metaphorically speaking. And the more bears I see, the more difficult the pursuit seems to become. There's grizzly bears (financial obligations), polar bears (family expectations), black bears (social pressure), brown bears (biological realities), and of course the panda bear (that psychological mind fuck that creeps up on you in the dark hours, demanding that you understand there's a good possibility that what you're writing will be read only by your mother, wife and three close friends [if you're lucky]).

All these bears are looking to eat you. Especially the panda bear, which is essentially an accumulation of all the other bears. A Super Bear, if you will. 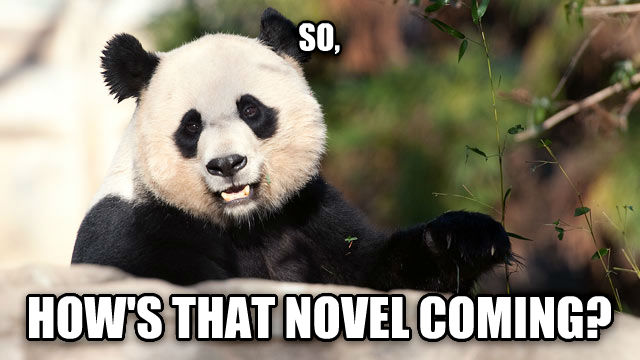 Keeping the Super Bear at bay is where the exceptional quality of the pursuit lies. And not just for writers. For all those who choose passion over profit. Of course, that doesn't mean I think people who make money are a bunch of passionless scabs. I don't shun money. In fact, I hope to make some, one day.

That being said, those pursuing their passion view money a bit differently. This past week I had a conversation with two friends: Ethan and Kathryn. Both are in their early thirties. Both work in the food industry. Neither identifies themselves as either a bartender or server. It's what they do to pay the rent. It's what they do to buy themselves more time for their art.

Because they view themselves in terms of their art: Ethan is a musician; Kathryn is a modern dancer. They can only truly believe this, however, if they put in the hours for their art. Meaning, they do just that. They work the necessary amount of time to afford a living (not the standard 40 [or more realistically the 60-80]). This allows them to maximize their individual pursuits of music and dance. And for the most part, they're happy with their choices. They're optimistic about their future. Their art comes first. This decision harms no one. And in their minds it seems clear: how else are you supposed to live?

Yet no matter how certain you are of your choices, the bears will always come out. They will scoff at your lifestyle, unable to comprehend such choices. The bears roar. They want to know why you're a bum; how you became such an underachiever; when it is you plan on making something of yourself. The bears' roars certainly add to the complexity of the pursuit, but these very roars add to the exceptional quality of it, as well. They highlight your persistence.

We all know the odds are stacked very much against us. We all know many of us will fall. Of course most that fall don't do so on account of a bear attack, but rather the mere threat of one. And that pisses me off. Because the bears are out there. We know this. But they're just as scared of us, as we are of them. They just happen to be bigger. The good news, of course, is we're all gonna die one day, so really you have nothing to worry about.