Elizabeth Lyons holds an MFA from Purdue University. She is a PhD candidate in poetry at the University of Houston, where she serves as a nonfiction editor for Gulf Coast.

I'm a Little Feral, But Only on Tuesdays: Animals, Humans, and Transformations

I. When I was a sophomore in college, I drove from Charleston to Columbia, SC to spend the day with my parents at the local zoo. I couldn't tell you all of the exhibits we saw, or if the Siberian tigers were stalking back and forth in their exhibit or sleeping in the early afternoon sun. I can tell you we looked at the flamingos, because this is habit, and we went through the bird sanctuary (also habit), where misters keep the air damp and warm. Jungle sounds were piped in--you could buy the c.d. at the gift shop. This is the part I remember: at the end, being in the gift shop with my mother, standing at a shelf of animal puppets. The puppets were more brightly colored than the real things and their plastic eyes seemed like the type that would fall out after a few months. There was a parrot and a gorilla, and my favorite--a green snake with a pink tongue. I picked up the lion and gave my mother the snake. I roared at her--only loudly enough for her to hear, and the people standing at the rock display next to us. (Who I'm sure gave me a look.) She hissed back at me. We mock-chased each other around the table--hissing and growling and laughing. We're a little strange, my mother and I, but what fun is there in going to the zoo if you can't talk back to the animals, or pretend to be one? II. Once I went hunting for alligators. Not to kill, just to find. A guide took our group out on a boat on a May night. He had a strong flashlight and shone it into the swamp, looking for the shine of a red eye. He cut the motor on the boat and we floated in the silence, in darkness, as he stood at the helm, throwing light into the swamp-grass. He found several, one or two fully-grown, too far out, and much too dangerous to try and grab. But the babies were small enough and the guide had been doing this for years. He reached down with his right hand and grabbed the gator's snout in one quick motion. And then a gator in the boat with us, tail twitching wildly and unable to move, caught by the mouth, the one thing that it made it dangerous. The guide showed us the scars on his arms, the places where he'd lost. But he won much more than he lost, and seemed to have no fear of the animals. Man vs. man, man vs. nature, man vs. self--the three basic conflicts. What is it about the natural world that we keep going back to, and specifically, what is it about animals that fascinate us as writers? 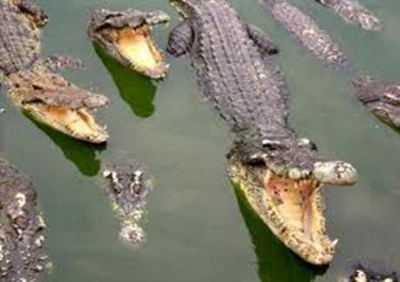 III. Flannery O'Connor, in her essay "Some Aspects of the Grotesque in Southern Fiction" writes about the balance between reality and the grotesque: "The problem for such a novelist will be to know how far he can distort without destroying, and in order not to destroy, he will have to descend far enough into himself to reach those underground springs that give life to his work." I've been thinking about this lately in my own work, and in the work that I read--the idea of distorting but not destroying. The balance of distortion to destruction requires not just a sensibility, but an understanding of human nature, and also the nature of the world, which operates under very different rules. Perhaps we write about animals because their logic is more quicksilver--the snake doesn't warn its prey before it strikes, it simply unhinges its mouth. By writing about animals, or if we're feeling Kafkaesque--turning into one, we distort, but still leave the larger lens--that of the world--intact.