Laura Jok is an MFA candidate in fiction at the University of Houston. Her work has appeared in Alaska Quarterly Review. This is her third year on the Gulf Coast staff.

I Pine, I Sigh, Please Pass the Mayo: What Sitcoms Can Teach Writers of Literary Fiction

I wish I could tell you that, at the end of a busy semester, I unwind by reading Dostoyevsky—or by writing a staggering tome of my own. To tell you the truth though, this week you're more likely to find me taking naps and watching sitcoms to give my poor fried brain a break. 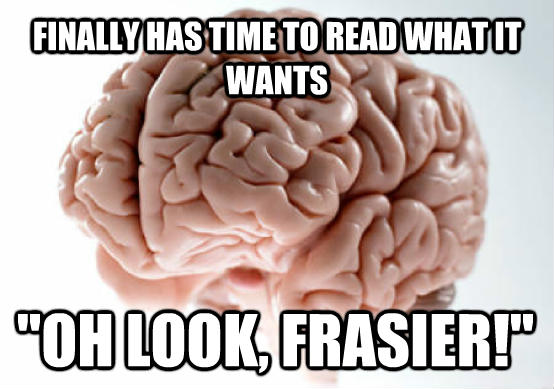 I wish I could tell you that my brain was more grateful. Or willing to take a break. Instead, I've been doing a lot of thinking about what the sitcom genre can mean to someone who writes fiction.

In graduate workshops, "melodramatic" is the dirtiest of words—but it is incredible how rarely we need to use it. We are so afraid of melodrama, most of us tend to err to the other extreme—lack of conflict, hyper-subtlety, or a sort of narrative flat affect—or, in my case, numbing and relentless humor.

We turn to sitcoms when we are intellectually or emotionally exhausted for this numbing effect. You could set a metronome to their rhythm of setup, setup, joke, you can expect that any long stretch of seriousness is building to a colossal punch line, and in case there is any confusion about when you should laugh, you can listen for the laugh track. The characters are types, and each episode is a new permutation of the same situation. You know when to laugh, and you know what to expect. The hallmark of the sitcom is predictability; the hallmark of good literary fiction is the disruption of expectation.

Literature that imitates the sitcom feels flat because of too much tonal consistency, but I think that its ability to cut any serious situation down to size tells us something about why we scoff at melodrama—and how writers of fiction can borrow from the sitcom, if judiciously and sparingly, to create tonal complexity and incongruity that represents real experience.

The corniness and implausibility of melodrama stems from a form of narcissism—a fictional world that conforms too completely to the character's emotional state, indicating a micromanaging author. When the character is sad, it must be raining. An orchestra of weepy string instruments follows our tragic hero everywhere, and no one anywhere in the world can possibly be having a good day.

Successful sitcoms can thwart this convention by framing the melodramatic situation in a world that refuses to cooperate with its desire to take itself seriously. I'm thinking, for instance, of Frasier, which in its later seasons, deploys a plot right out of melodrama. David Hyde Pierce, of all people, has to break up a marriage. His character declares his love to Frasier's housekeeper on her wedding night and they run away together, leaving behind his wife and her groom. Although at moments, these characters may act as if they are in their own private drama, the rest of the cast did not receive the memo, nor did the scene and prop departments. As far as everyone and everything else is concerned, they are still in a comedy.

When they declare their love to each other, the unhappy couple happens to be sitting side by side on the ends of twin beds drinking orange soda from the hotel mini bar and talking nervously about drinking orange soda. The connecting doors of the room will not lock, and they are interrupted by, among others, the bride's drunken brother who has been kicked out of the hotel bar and the groom, who wants to know if they think the growth on his foot is a blister or a boil. The petty, often comical, concerns of others intrude on their Moment. Later, when Frasier feels guilty for his part in setting the crisis in motion, his pompous self-aggrandizement falls on deaf ears—because his father has his head in the fridge. He is looking for the mayonnaise; he is wondering whether or not it is safe to eat expired mayonnaise.

Although in sitcoms this kind of undercutting device is over-deployed to the extent that it becomes flat and predictable, in sitcoms, as in life, it is hard to convince yourself for long that the universe revolves around you. In sitcoms, this incongruity is funny, but in life or literary fiction, it can be tragic. You mourn, strive, or struggle; your life changes forever, and the indifferent world goes on making jokes and sandwiches.