Edward Porter's short fiction has appeared in Best New American Voices 2010, Colorado Review, Booth Journal, and Inch Magazine. A Ph.D. candidate in Literature and Creative Writing at the University of Houston, he received his MFA from Warren Wilson College, and is a former Fellow in Fiction at the University of Wisconsin-Madison. 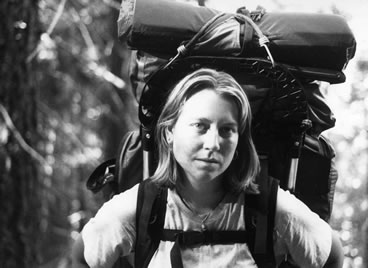 By the time I left on my trip, I'd dealt with my mother's death through more conventional means, through long talks with my shrink and my friends. Losing a mother at twenty-five, as Strayed did, may well be tragedy. Losing a mother at forty, however painful, is realism. And realism, as anyone who has bothered to write a bibliographic essay on the subject knows, is our doomed effort to resist with a clear eye the inevitably romantic nature of storytelling. In my own case, my mother's death was one of several catalysts leading to a midlife crisis, the hilariously embarrassing details of which have no business here. Suffice it to say, I planned my PCT trip as a spiritual palate-cleanser. I knew I'd never have that much free time again, and I wanted sensation. At that point of my life, I was living only for sex and food. My trip was an extension of that: an orgy of exercise and vistas, of physical freedom and nature worship undertaken with the dim understanding that when I got back, I was going to have to figure out what my second act was going to be, and lash myself to some sense of quotidian purpose and responsibility again. Now, in my last year of doctoral studies, lashed seems a particularly apt word for where I've ended up. Whenever I've thought of writing about the PCT since, I've been defeated by the absence of apparent narrative structure in my experience. What I have is anecdotes. And yet, looking over what I've just written, I see more possibility now than I have before. Although, as I said, at this point I've been scooped. The drive back to Houston the next day was, if anything, more uncomfortable than the drive out, leaving me wondering exactly what my own controlling metaphor meant. What exactly, in this story, is the real pain in the ass? Writing? Getting a doctorate? My immature jealousy of other people's success? Again, we're looking at the issue of competence. Obviously, when it came to finally writing her book, Strayed's shit was all the way together. She was in control of her technical problems, made the correct decisions at her crises, and was adequately prepared for the challenge. Of course, it wasn't her first book: she was exercising skills she'd already acquired. Metaphorically speaking, she may have started out as overburdened as anyone else. It had taken me more than a decade to become the hiker I was when I went on the PCT. Strayed wrote Wild well over a decade after she'd made her trip. I hadn't come to Austin as a spectator. I was going to be reading later on myself, admittedly in far less reputable circumstances. We all come to writing with romantic hopes. In the end, what is real? The endurance of pain. The constant preoccupation with what has to be done.