R.A. Villanueva is the author of Reliquaria, winner of the 2013 Prairie Schooner Book Prize. He is also the winner of the 2013 Ninth Letter Literary Award for poetry. A founding editor of Tongue: A Journal of Writing & Art, he lives in Brooklyn.

Of all the language I’ve transported over to poetry from other realms, “catalyst” is, by leaps and bounds, the term I depend on the most. It’s biochemical—alchemical, even. In its very nature there is activation, modification, change, rupture, drive, metamorphosis; there is “Fire burn and caldron bubble;” there is reaction and everywhere risk of the new.

(An aside: when it comes to the usual vocabulary, my ear doesn’t take to “prompt” or “exercise.” “Prompt” is too tame; it sounds like a nudge, or a faint prodding. And depending on the moment, assigning an “exercise” can sometimes call up the image of Winston Smith stretching before a telescreen in fatigues.)

Here’s a small array of excerpts, quoted materials, visual texts, videos, paintings, found objects, &c. that have appeared in my classrooms and across the varied iterations of Birds Not Birdcages.

I’m hoping these catalysts can be of some use to you and your students. I’m hoping, too, that they will inspire and incite experiments with your own work.

—From Poetry and Marriage: The Use of Old Forms, Wendell Berry (1982)

Your triggering subjects are those that ignite your need for words. When you are honest to your feel­ings, that triggering town chooses you. Your words used your way will generate your meanings. Your obsessions lead you to your vocabulary.

—From The Triggering Town: Lectures on Poetry and Writing, Richard Hugo (1979)

—From Swimming Studies by Leanne Shapton

Learning to read is more than learning to group the letters on a page. Learning to read is a skill that marshals the entire resources of body and mind. I do not mean the endless dross-skimming that passes for literacy, I mean the ability to engage with a text as you would another human being.

—From Art Objects: Essays on Ecstasy and Effrontery by Jeanette Winterson 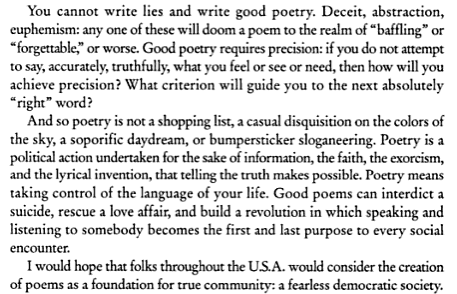 I recommend overstimulation. If it’s too quiet, I find it’s hard to hear my voice. When I write, I overwhelm myself: The TV’s on in the background playing a movie or a reality show, I’m listening to music, I’m texting five friends, the window’s open and I’m eavesdropping on the conversations and arguments on my Bed-Stuy street below, the coffee table is stacked with books—art books, poetry collections, essays. Because I don’t know what stimulus will jumpstart a poem, which voice or atmosphere will turn me on, I douse myself in all of them at once. I’m endlessly curious (read: nosy), and approach my writing as an ethnographer: observing the behaviors, languages, impulses, and rituals of other people and myself. I take furious notes wherever I am, recording observations and thoughts. I hoard and collect. That’s how I compose poems—getting full on everything… The poem’s energy comes from outside stimuli, allowing its own voice to be thrust up to the surface.

—Morgan Parker, author of Other People’s Comfort Keeps Me up at Night (Switchback Books, 2015)

While we dawdle and quarrel
in search of fundamental answers,
all things shout:
‘Give us new forms!’

82nd & Fifth from the Metropolitan Museum of Art and its YouTube playlist. In particular, “Stare” by Jeff Rosenheim:

and “Startled” by John Carpenter

Stare. It is the way to educate your eye and more. Stare, pry, listen, eavesdrop. Die knowing something. You are not here long.

Do the poet and scientist not work analogously? Both are willing to waste effort. To be hard on himself is one of the main strengths of each. Each is attentive to clues, each must narrow the choice, must strive for precision…The objective is fertile procedure. Is it not? Jacob Bronowski says in The Saturday Evening Post that science is not a mere collection of discoveries, but that science is the process of discovering. In any case it’s not established once and for all; it’s evolving.

—Marianne Moore, in conversation with The Paris Review

Limitations are really good for you. They are a stimulant. If you were told to make a drawing of a tulip using five lines, or one using a hundred, you’d be more inventive with the five.
—David Hockney

Rhythmic form and subject-matter are locked in a permanent embrace: …in metrical verse, it is the nature of the control being exercised that becomes part of the life being spoken about. It is poetry making great use of the conscious intelligence, but its danger is bombast—the controlling music drowning out everything else. Free verse invites a different style of experience, improvisation. Its danger lies in being too relaxed, too lacking in controlling energy.

—From The Occasions of Poetry: Essays in Criticism and Autobiography by Thom Gunn

Q: A poem might find its form in the way a person seeks to find out who she is, how she can be seen.

A: Right. I once heard the poet Li-Young Lee say, Syntax is identity. That’s something I’ve always believed, that everybody has a distinct vocabulary based on experience, upbringing, and geography. For me, form is a way of imprinting yourself. I think of it the way I think of the cave paintings of Lascaux, where there is this sense that somebody wanted to affix something permanent of themselves in a world, or a life, that is impermanent.

—Tarfia Faizullah, in conversation with The Paris Review

A poem is a small (or large) machine made of words. When I say there’s nothing sentimental about a poem I mean that there can be no part, as in any other machine, that is redundant…poetry is the machine which drives it, pruned to a perfect economy. As in all machines its movement is intrinsic, undulant, a physical more than a literary character.

…There is no poetry of distinction without formal invention, for it is in the intimate form that works of art achieve their exact meaning, in which they most resemble the machine, to give language its highest dignity, its illumination in the environment to which it is native. Such war, as the arts live and breathe by, is continuous.

—From William Carlos Williams’ Introduction to The Wedge

I like shorelines, weather fronts, international borders. There are interesting frictions and incongruities in these places, and often, if you stand at the point of tangency, you can see both sides better than if you were in the middle of either one. 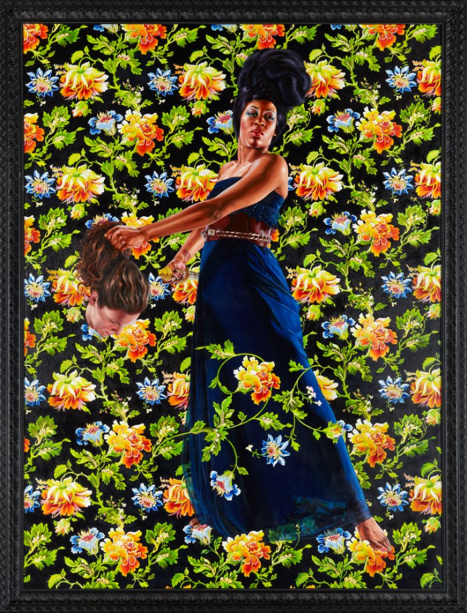 Italo Calvino, a member of the Oulipo, once wrote, ‘Literature is a combinatorial game which plays on the possibilities intrinsic to its own material, independently of the personality of the author.’

…Since writers are always constrained in myriad, unacknowledged ways, as another Oulipian, Daniel Levin Becker writes, ‘Embracing a set of carefully chosen rules is meant to focus the mind so narrowly that those obscure pressures and preoccupations fade, revealing paths and passageways that one would never notice without the blinders.’ We could go even further and say that composing in form produces emotion—not only channels it, but generates it.

—from "Lyric Backlash" by Rachel Galvin

What would we be without desire for form?
Pattern keeps us safe. We look for omens in a flock
of redwing, the gods’ will in dappled entrails,
the outline of a story in the stars. We break the line

to shape it, string catgut over membrane,
set up a ten-foot memorial
to music – a scallop shell, a pilgrim’s prayer —
in shale of an eroding coast
and turn it east to face the storm.

Là où est le danger, là croît aussi ce qui sauve. Where there is danger, there is also something that saves.

You write in order to change the world, knowing perfectly well that you probably can't, but also knowing that literature is indispensable to the world...The world changes according to how people see it, and if you alter, even by a millimeter, the way...people look at reality, then you can change it.

—James Baldwin, as quoted by writer Russell Banks in a tribute titled “To Change the World”